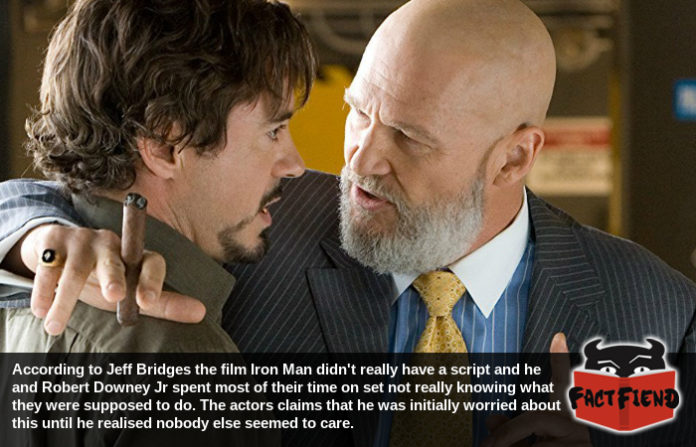 Considering that the first Iron Man movie effectively launched the most successful series of films in human history, you’d think Marvel would have spent so much time polishing the script it could be seen from fucking orbit. However, according to Jeff Bridges, the whole film was a rushed mess he can’t believe actually ended up being a success.

You see, in a 2009 interview reflecting on his role in Iron Man Bridges revealed that for most of production the film’s script was either in the process of being re-written or completely absent. As a result, Bridges would routinely walk onto set with no idea about what the fuck he was supposed to be doing for that scene and instead be told by director Jon Favreau to just wing it. Something the actor claims caused him an immense amount of stress while filming because he likes to know exactly what he’s doing in any particular scene. Which we guess makes sense because come on, does this really look like the beard of a patient man? 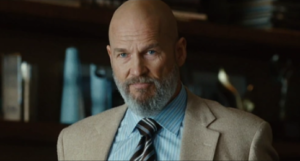 Bridges likens the making of the movie to a “$200 million student film” and is convinced that Iron Man succeeded based purely on the strength of Robert Downey Jr’s improvisational skill and portrayal of the character. In fact, according to Bridges, Downey Jr and himself would often swap roles and perform as each others’ character for key scenes that didn’t have a script yet to get a feel for how best to act it out. Something Bridges was apparently uncomfortable with but was happy to do so long as Robert Downey Jr was there to guide his old-ass iron-plated hips. 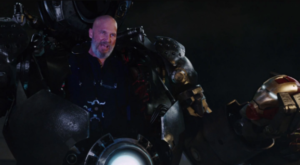 While all this was happening Bridges claims that Marvel executives basically spent all of their time arguing with Downey Jr about his portrayal of the character, angrily insisting that “Iron Man wouldn’t do that” whenever the actor went off-script. To which Bridges replied by sarcastically explaining that he and Downey Jr would be happy to stick to the script as soon as the executives finished it.

After being reassured by Jon Favreau that everything was going to be alright, Bridges eased into the role and decided to just roll with it. Something you’d think would come naturally to the guy who played the fucking Dude but, whatever.

The most annoying part though, at least for Bridges, was that it was until after he settled into the role that he was informed by Marvel that they planned to kill his character off. You see, in an early draft, Iron Man was supposed to end with the Iron Monger armour being ripped open revealing that Obadiah Stane was no longer inside of it, suggesting that he’d survived his fight with our titular hero and that he could potentially return as a villain in a sequel. However, when the time came to actually film that scene, they never opened the armour, something Bridges pointed out while on set because he was actually kind of excited to make another movie by this point. Bridges was then informed by Marvel executives that they’d scrapped the scene, prompting him to ask out loud “You’re going to kill my guy?”. To which the nervous executive responded “Well, it’s a comic book. You could come back. Who knows?”