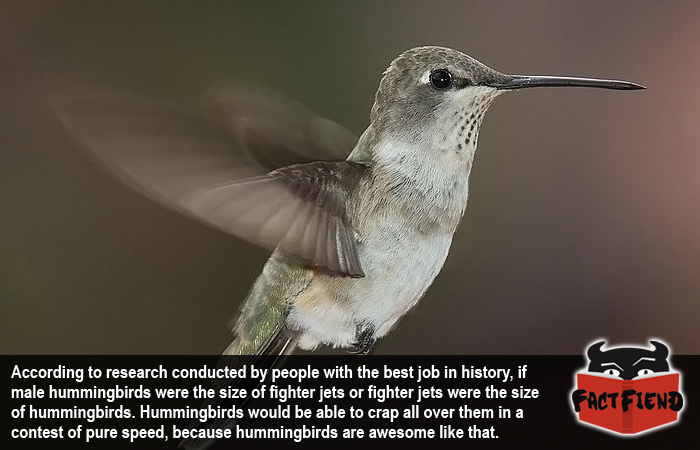 Hummingbirds are tiny feathered ninjas who can fly in more directions than Willy Wonka’s glass elevator and according to Principle Skinner, their tiny tongues are like knives. Also, according to scientists, they’re better at aerial manoeuvring than fighter planes equipped with those suits from Attack on Titan.

That isn’t just use using the hyperbole we’re oh so fond of to make a point, according to experiments conducted by actual scientists (the kind with degrees and fancy lab coats with dozens of pockets), the the speeds a male hummingbird can reach during his mating dance positively shit all over the speeds modern jets and planes can reach attempting the same moves. Which considering how big hummingbird poop is, isn’t that big of a deal, but it’s still kind of impressive.

The experiment, which involved pissing off male hummingbirds with stuffed female hummingbirds (automatically making it the best job ever), discovered that the one thing jet planes have over hummingbirds is that they can accelerate faster than them in a dead sprint. Of course it goes without saying that the hummingbird response to this fact is to fly backwards like it ain’t no thing.

However, planes being able to accelerate faster than hummingbirds doesn’t change the fact that if we lived in a magical world where hummingbirds were the size of planes, they’d be able to fly hundreds of miles per hour, backwards! In case the image of a bird flying backwards isn’t impressive enough, it’s important to keep in mind that when a hummingbird flies backwards, it’s using almost no extra energy while doing so. This means technically, a hummingbird could fly everywhere backwards without any problems.

For anyone not grasping how ridiculously amazing this is, try running to work backwards tomorrow at 30 miles per hour while punching your hands in front of your head 90 times per second. Preferably while wearing a giant hummingbird outfit and screaming about how crime will rue the day it messed with you.