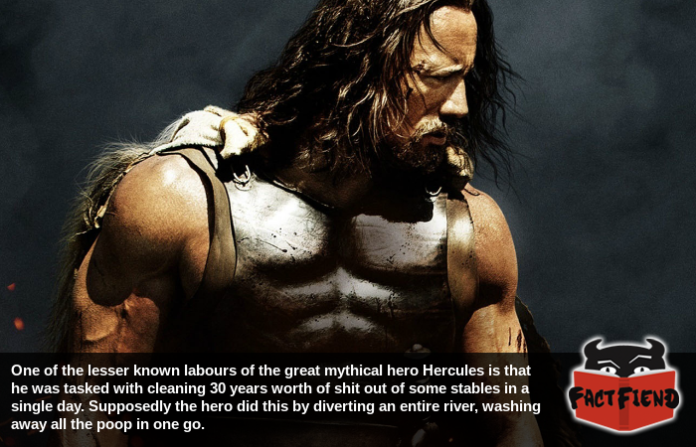 Hercules is arguably one of the best known figures of Greek mythology. Blessed with prodigious strength and limitless stamina, the hero is best known for the 12 labours he undertook to cleanse his soul of sin. One of which involved cleaning up a mountain of shit.

According to Greek myth the story of the Labours of Hercules began when the hero was goaded into accidentally killing his own wife and child by the goddess Hera. Understandably upset with himself for power-dunking his children to death in a fit of god-induced rage, Hercules sought penance from the Oracle of Delphi who told him the only way to atone for his heinous actions was to do whatever his shit-ass cousin King Eurystheus wanted him to do for 12 years.

Eurystheus, spying an opportunity to fuck with his cousin, went right ahead and tasked Hercules with 10 labours he believed would be impossible for a single man to accomplish. Seemingly just to be dick, after Hercules accomplished these supposedly impossible tasks Eurystheus claimed that two of them didn’t technically count and that Hercules had to make up for this by first picking some golden apples and then stealing Hades’ dog, Cerberus. You know, the one with three heads.

The legend continues that when Hercules turned up with a three-headed hell beast he’d personally stolen from the king of hell he immediately released Hercules from his servitude on the proviso he take the dog back.

Now of these 12 labours several are fairly well known and frequently appear in depictions of the hero in media such as the slaying of the Nemean Lion (a big-ass lion supposedly immune to all weapons that Hercules strangled to death) or capturing the flesh-eating mega-horses of Diomedes (which he accomplished by feeding Diomedes himself to the creatures). However, one that is inexplicably left out of many of retellings of the legend is the cleaning of the Augean stables. A labour that tasked the hero with cleaning up 30 years of turds in one day.

According to legend King Eurystheus was well aware that the hero was likely strong and wily enough to accomplish this feat and supposedly tasked him with it purely to be a penis. Nonetheless many, including the owner of the stables themselves King Augeas, believed that cleaning them was an impossible feat because it contained so many thousands of cattle. A fact the hero used to his advantage, betting the king 10% of his entire herd of cattle if he could indeed clean the 3 decades of shit that had built up in the stables in one day.

After the king agreed to these Hercules went and diverted an entire fucking river towards the stables, washing away the mountains of shit in a matter of seconds. As so often happened with Hercules in these scenarios, the king tried to screw him over and go back on the deal. Something Hercules responded to by kicking the shit out of the king, erm, in court, helping his son exile him from the city so that he could take over.

For some reason this remarkable feat wasn’t deemed as impressive as strangling a bulletproof lion to death and stealing Satan’s dog so it’s largely left out of many stories about the mythical heroes life. Which is a shame because we’d have paid good money to have seen the rock clean up 30 years of CGI donkey shit.