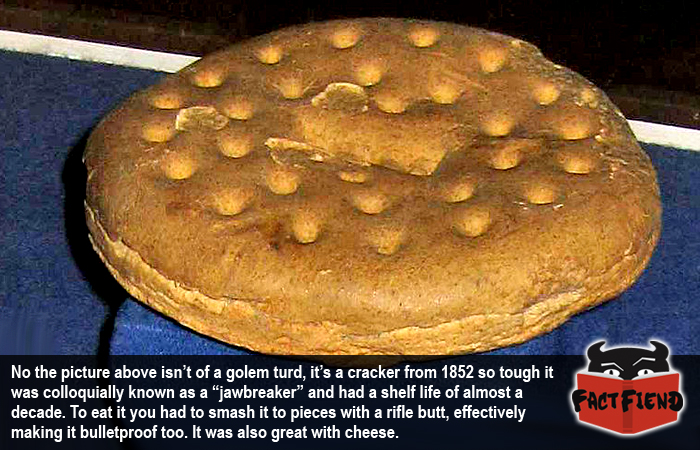 Hardtack was a cracker-esque type of food specifically designed to be as hardy as possible. It was primarily created out of necessity for sailors and soldiers to always have something to eat on hand that could survive the rigours of constant movement. It was also almost nigh unbreakable.

We’re not using hyperbole here, the colloquial names for hardtack ranged from “tooth dullers” to “sheet iron”. These things were literally capable of breaking a man’s teeth in two if he was too much of a pussy when it came to chowing down.

Hardtack was a simple mixture of flour and water (though salt was sometimes added for flavour) and due to its dryness and the fact nothing was stupid enough to try eating them without a hammer, they were the perfect food for long journeys by either land or sea. In fact, hardtack, under the right conditions, could last for years. Rather like that one tin in your cupboard no one is ever hungry enough to eat because if you just keep opening the fridge over and over again, eventually more food will appear inside it.

Seriously, look at the picture attached above, that cracker is from 1862! Even time doesn’t want to touch these things. The crackers were reportedly so tough that during the Civil War, soldiers had to smash them to pieces with the butt of their rifle before even attempting to eat them and even then they did so with a mouthful of whisky. In other words, these things were so tough, hardened soldiers needed a shot of whiskey and a freaking rifle just to eat them.

Weirdly, despite the fact soldiers used to historically fish weevil shit out of these things while enjoying their morning coffee on a daily basis, they’ve enjoyed a thriving revival of sorts with some niche cracker enthusiasts. Especially in Japan, because come on, like you weren’t expecting that sentence.