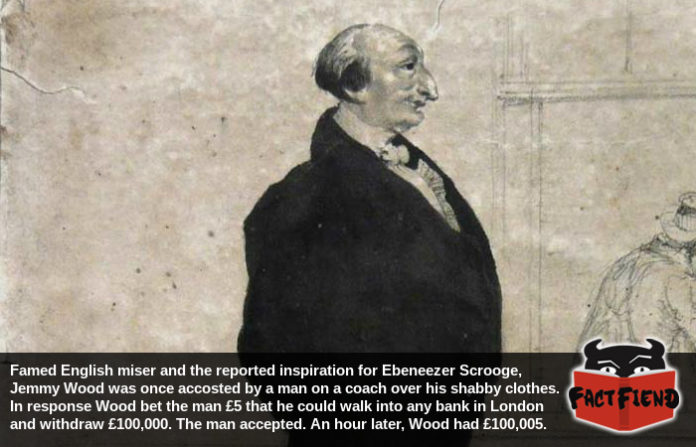 The term “miser” is often used to describe a person so averse to the idea of spending money they’d rather put a cobra in a chokehold than open their wallet. Unusually for a spend-thrift, tight-arse – famed British eccentric and miser Jemmy Wood once casually withdrew a sizeable amount of his fortune from a bank just to win a £5 bet.

According to historians, James (Jemmy) Wood was a immeasurably wealthy banker who lived in the city of Gloucester during the latter half of the 18th century. How wealthy you ask? Well to put it simply when his grandfather father died Wood literally inherited a fucking bank.

Located in a building that also doubled as a store that sold drapes to save on rent, Wood’s bank was staffed by himself and two clerks who weren’t allowed to touch any of the money. To ensure no poor people ever bothered him Wood would only begin paying interest on deposits after a year and even then he refused to offer a competitive rate. Despite this, people still flocked to Wood’s bank to let him look after their money because of his exceptionally keen eye when it came to spotting counterfeit money. In fact, Wood was so confident in his ability to spot counterfeit money that it’s noted the first thing people would see upon approaching his desk was a series of counterfeit coins he’d nailed into it.

Even though he was worth the equivalent of several million pounds in modern money, Wood refused outright to spend even a penny on himself unless it was absolutely necessary. To this end, Wood reportedly spent the majority of his time travelling to farms in his surrounding area stealing turnips so he didn’t have to pay for food. On one occasion Wood was caught red-handed doing this by a farmhand who proceeded to beat the living shit out of him. After the beating the farmhand angrily demanded to know who Wood was so that he could tell the authorities, to which Wood responded “I’m the owner of this land” prompting the farmhand beat him up again. Amazingly even after this happened Wood continued to slink around local farms stealing root vegetables when he was hungry because apparently the risk of being beaten to death over a fucking turnip was worth it if it meant he didn’t have to spend money. 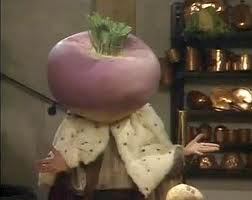 Although he could easily afford to travel everywhere in style, or at least not in a suit that smelled like shit, Wood walked everywhere in a suit that smelled like shit. It’s noted that Wood was such a sorry sight that one time a fucking hearse asked him if he wanted a lift. After discovering that the hearse wasn’t carrying a corpse, Wood climbed into the back and went to sleep.

Ever on the look out for a way to make more money and keenly aware of how shit his clothes were, during a rare coach trip to London, Wood found himself being mocked by a better dressed man. Rather than getting his Frozen on and letting it go, Wood approached the man and proposed a simple wager – When they arrived in London he could walk into the first bank he saw and ask for £100,000, if he couldn’t, he’d give the man £5. After a firm, manly handshake to confirm the bet, Wood waited patiently for the journey to end, presumably while nursing a throbbing erection at the thought of winning the money and never spending it. Upon arriving in London Wood then calmly strode into a nearby bank and asked the teller for £100,000. Not having that kind of money on hand, the bank gave Wood the money as a check, which he then showed to the guy who hours earlier had been making fun of him for being poor. After the man begrudgingly agreed to honor the bet, Wood walked straight back into the bank and deposited £100,005 into his account.