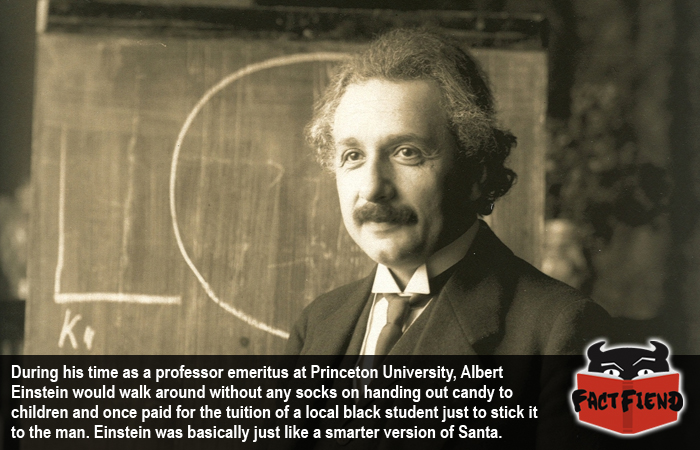 Albert Einstein is mostly known for his many contributions to science and his gloriously trimmed moustache, sadly it seems that few people are aware of the fact that Einstein was also a huge supporter of civil rights and that he never used to wear socks.

In regards to the latter, because we know that’s the part you’re actually more curious about, it’s noted that after his second wife, Elsa passed away, Einstein basically stopped giving a shit about how he dressed. Though in his youth he’d been known as an incredibly snappy dresser, often pictured wearing fitted suits so sharp paper cuts could learn a thing or two from them.

It’s believed that Elsa is the primary reason Einstein took such good care of his appearance as she was apparently very conscious of how the two of them looked when they were pictured together. Which was often because Einstein was one of the most famous men on the face of the planet, he was pretty much a rock star.

However, after Elsa passed and Einstein was awarded a position as a professor emeritus (essentially a retired professor who was still allowed to hang around university property) at Princeton, he began dressing comfortably instead of stylishly and it apparently wasn’t uncommon to see the ageing professor walking around without any socks on in a sweatshirt and sandles.

Einstein didn’t really have time to register what people thought of him though because it’s was at this point in his life that Einstein decided he wanted to personally strangle racism to death. Though he was a staunch supporter of civil rights his entire life, it was during his later years that Einstein became particularly motivated.

For example, when Einstein heard that African American Opera legend, Marian Anderson had been denied entry to a local hotel, Einstein immediately offered her a place to stay. Anderson accepted this kind offer and the two became life-long friends, with Anderson often staying with Einstein whenever an asshole hotel owner decided that they didn’t want a world-famous opera singer staying in their hotel.

When Einstein heard that Lincoln university had become the first university in the country to offer degree courses to black students, he travelled there to give a speech on how “Racism was a disease of the white man“, before being awarded an honorary degree, because that was what happened to Einstein wherever he went anyway.

Around the area in which Princeton itself was located, Einstein became a staple of the local community, often being observed walking around the poorest black neighbourhoods in his baggy-ass sweatshirt handing out candy to the local children. Which would be creepy if anyone but Einstein did it.

Einstein even once paid for the tuition of a young black man he’d never met, we don’t actually known this man’s name or what he studied because almost nothing Einstein did in support of civil rights was recorded by the mainstream media. Einstein literally paid for some kids tuition because he felt like it and then never told anyone about it because for him it was just the right thing to do. The only reason we know that it happened is because decades after his death, someone went to the areas Einstein would visit and heard from the people that lived directly there that a crazy looking guy with a shock of frizzy white hair would hand out presents to the children on a weekly basis.

Einstein was a total boss is what we’re trying to say.