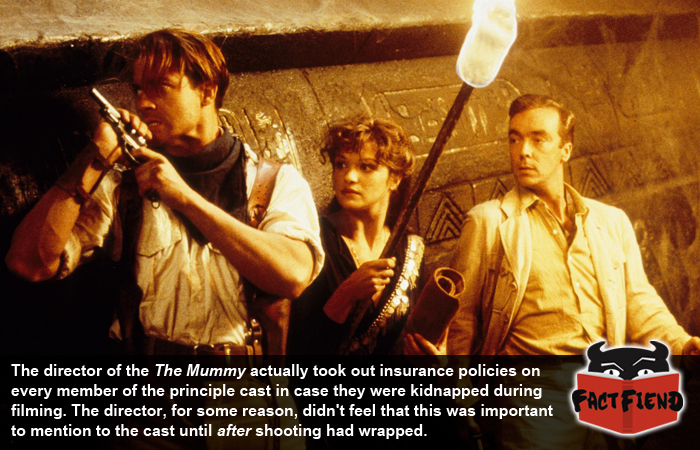 If you’re one of about 6 people who apparently saw the recent remake of The Mummy and want to wash the taste of a shitty Tom Cruise vehicle out of your mouth, here’s a video about how the cast of the superior 1999 version had kidnapping insurance.

If videos aren’t your thing, you can find the text version after the jump.

The Mummy, despite being a film set primarily in and around Egypt was actually filmed mostly in the country of Morocco. This was apparently because filming in Egypt would have been too dangerous due to political unrest in the region at that time. Boy how times have changed, huh?

However, Morocco wasn’t exactly the safest place in the world to shoot a movie and there was a very real risk of the a member of the cast being kidnapped and held for ransom or worse. We know this because the director physically had to take out kidnapping insurance policies – which are surprisingly not something we just made up – on key members of the cast.

Presumably so that the cast would be able to concentrate on remembering their lines and avoiding the dozens of snakes, spiders and big-ass scorpions roaming around on set, the director, Stephen Sommers, didn’t tell anyone on set that he’d literally had to take precautions in case they were kidnapped and killed by terrorists.

If you’re wondering why the fuck-tits Sommers didn’t need to tell members of the cast he’d taken out insurance policies on them in case they were violently murdered, it’s because the money wasn’t for the cast. It was for the studio. You see, it’s fairly standard practise for studios to take out insurance on its stars in case they’re injured, killed or otherwise unable to complete the movie so that their investment in them isn’t lost. If that sounds shitty, it’s because it is but hey, being a shitty person his Hollywood executive 101, baby.

As if all that wasn’t bad enough, the off-hand comment we made about spiders and scorpions with a grudge roaming around on set weren’t a joke, that was a genuine thing the cast also had to deal with on top of potentially being kidnapped. Hell, several members of the film crew actually had to be airlifted to hospital after they were bitten by snakes. And then, just to rub it in, filming itself was constantly interrupted by sandstorms, and not the kind you get when someone shakes out an oversized beach towel, the kind that can strip the skin off your face if you run into to quickly.

So, if you’re feeling sad today, just remember that for one brief but nonetheless glorious moment in history, Brendan Fraiser had a kidnapping insurance.