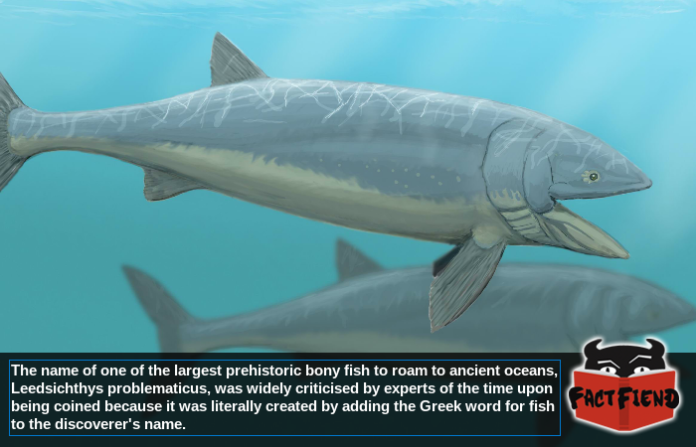 Leedsichthys problematicus, better known as one of the largest fish to have ever swum in the Earth’s oceans, was a prehistoric fish-shaped tank capable of headbutting its way through the Hoover Dam. Although the fish is mainly of interest to palaeontologists due to its massive size, we think the most intriguing thing about the fish was the bizarre fight over its name.

To explain, the name Leedsichthys problematicus roughly translates to, depending on how you want to translate it, Leeds’ Problematic Fish or Problematic Fish of Leeds. In addition to being all kinds of hilarious, the name is quite literally just discoverer’s name with the Greek word for fish – ichthys – slapped on the end.

That discoverer was a guy called Alfred Nicholson Leeds, a gentleman farmer and fossil enthusiast who collected and sold thousands of dinosaur skeletons during his lifetime. Wholly self-taught, Leeds collected fossils mostly for the sheer hell of it and even had a dedicated – and we’re not making this up – Bone Room in his house purely for polishing and brushing his various fossils.

Owing to the fact he collected fossils for fun Leeds wasn’t overly concerned with the politics of bone collecting, mostly being happy to just collect and sell what he found to interested museums and private collectors. As a result when Leeds stumbled across the bones of a previously undiscovered bony fish that existed millions of years ago, he packed up the fossils and sent them to a fish expert and promptly forgot all about it. Unbeknown to Leeds though the guy he sent the fossil accidentally started a raging argument amongst palaeontologists when he tried to name the fish after him.

You see, the guy Leeds sent the fossils to, Arthur Smith Woodward decided to call the newly discovered giant murder-fish, Leedsichthys problematicus, which as noted above translates roughly to Problematic Fish of Leeds. Woodward chose the name as a nod to Leeds, opting for the epithet “problematicus” in acknowledgement of the fact finding pieces of the fossil had been a total and utter pain in the dickhole for Leeds. 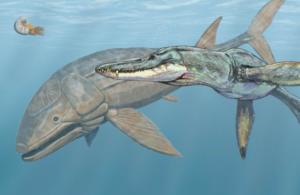 The thing is Woodward’s fellow eggheads didn’t exactly appreciate him breaking with the standard naming conventions for newly discovered creatures and an argument soon erupted about whether the name was “proper”. Specifically some palaeontologists raised issue with the fact Woodward had simply added a Greek word to Leeds’ surname when naming the fish with some going as far to accuse Woodward of barbarism. An absurd claim because come on, does this look like the facial hair of a barbarian?

Eventually Woodward got so sick of his peers writing him pissy letters about the name he’d given a 50 foot long fish that had been extinct for 160 million years that he tried to change the name to Leedsia problematica, which he felt sounded more “Greek”. The new name didn’t catch on, but the fact Woodward tried did appease to people writing angry letters.

Hilariously, despite the new name Woodward suggested sounding more proper, experts have noted that it would be considered “non-valid” by modern standards whilst the name everyone called barbaric was perfectly acceptable, if a little odd. Meaning all the self-professed experts shitting on Woodward who agreed that the new name was more suitable were more full of shit than a constipated dinosaur.