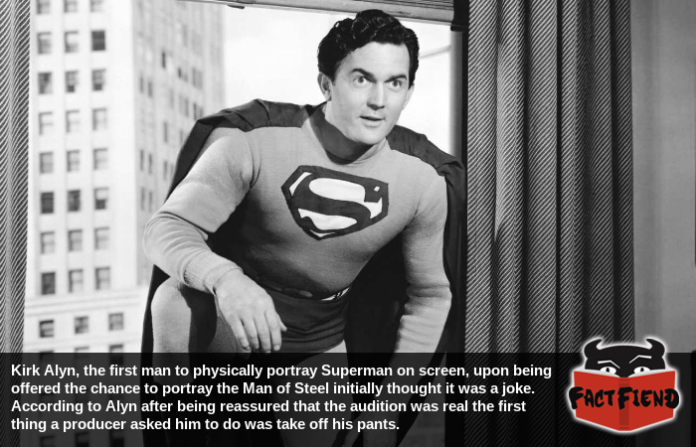 Superman is a character defined by the fact he is, for all intents and purposes, a God in human form. For this exact reason the first actor to play Superman didn’t think the Man of Tomorrow from the comics could be translated to the big screen, something D.C. Comics disagreed with when they saw his thighs.

That man was Kirk Alyn, a journeyman actor known almost solely for his brief stint as the Last Son of Krypton. A role he owned so hard it effectively ruined his entire career because nobody could see him as anyone but Superman. Something we’re hoping provided Alyn with at least some comfort as he watched his career slide down the toilet like a freshly laid turd.

The story goes that Alyn was largely approached to portray Superman due to a combination his uncanny resemblance to Clark Kent and his ownership of a set of pecs capable of crushing a diamond walnut. In fact according to Alyn upon meeting representatives from D.C. Comics one of the first things they said was “Hey, he looks just like Clark Kent.” Which, well, we can’t really fucking argue with. 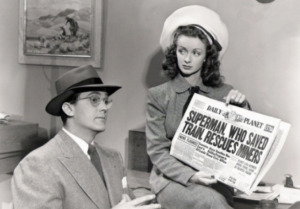 The problem though, at least in Alyn’s eyes was that Superman simply possessed to idealised a body for any human man to convincingly portray him. Supposedly the actor also felt that there was no way special effects of the time could realistically show off some of the Man of Steel’s more fantastical abilities like flight and heat vision. A problem that has been mostly solved today though apparently billion dollar entertainment juggernauts still struggle translating some aspects of Superman to the silver screen. 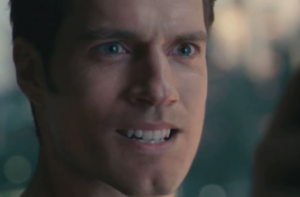 This was seemingly a worry at the back of D.C. Comics executives who asked Alyn to take of his shirt, explaining that they wanted to see if he had a good enough physique to portray a guy commonly depicted as having a chest half a mile wide.

Alyn did as he was told and even flexed a little for good measure, much to the delight of the gathered executives who we assume clapped along as he made his pecs do that dancey thing Terry Crews seems to love so much.

Alyn was less enthused though when the same executives asked him to remove his pants and show off his thighs in the same manner. The actor responded by tactfully explaining that his legs were fine, which didn’t sate the curiosity of the producers who still wanted proof that he possessed legs muscular enough to portray the fucking Man of Steel. After a brief back and forth a producer suggested that Alyn could show off how strong his legs were by picking up a nearby woman and running up a flight of stairs, which he did, later claiming that he sprinted up the stairs carrying that lady like it was “nothing“. We should probably note that Alyn was 37 when this happened.

The stunt impressed the gathered producers and executives enough for them to award Alyn the role of Superman. A role that, as we mentioned previously, basically ruined his entire career but did allow him to swing his dick around in a skintight suit, which we assume was totally worth it.