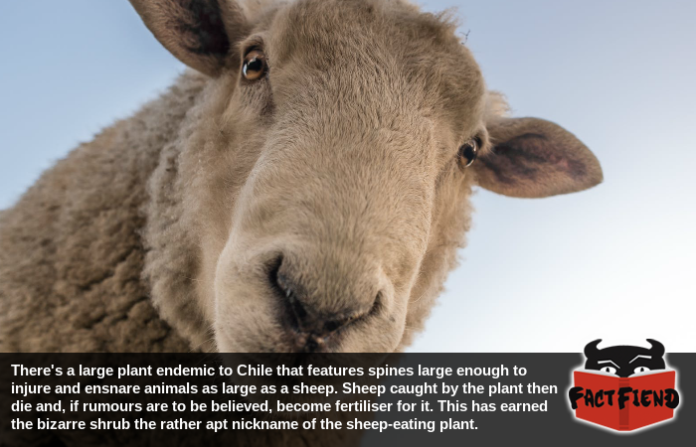 If there’s one thing you can say about plants it’s that they’re not exactly mobile, as such, you wouldn’t think they pose much of a threat to anything able to just, walk away from where they are. The Puya chilensis is an apparent exception to this rule given that it is apparently capable of hunting sheep.

Endemic to Chile and most commonly found dotted along the sparse, barren hillsides of the Andes, Puya chilensis cuts an imposing figure for a plant with particularly impressive examples of the perennial standing a formidable 10 feet tall. Incredibly hardy and durable, the plant is well suited the Spartan landscape it calls home, though it is known to occasionally grow and flourish in more, accessible areas like a small island just off the coast of England called Tresco, where the plan grows in abundance. Which is handy for Puya chilensis because Tresco also just so happens to be a haven for the plants apparent favourite food, sheep.

You see, according to a very popular rumour, Puya chilensis regularly stalks and kills sheep despite the unmistakable handicap of being a completely immobile plant. Which probably has you thinking, well does the plant at least give off a powerful, sheep-attracting aroma when it flowers or something? To which the answer is, no, the plant is largely inedible as far as most animals are concerned and it reportedly takes upwards of 20 years to flower. So how does it supposedly ensnare, kill and eat unsuspecting sheep we hear you, our handsome, large-penised reader ask? Well, largely by relying on the fact sheep are fucking stupid.

Specifically, the plant is said to be able to catch sheep by simply sitting there being all large and threatening, at which point sheep apparently walk into it and become trapped in the perennials massive, knife-like spines. After the while the sheep will die of hunger or exposure and its body will decompose into the ground, becoming fertiliser for the plant. Something that has earned the Puya chilensis the not unimpressive moniker of the sheep-eating plant. The problem is, you may have noticed we’ve used words “apparently” a lot during this article and that’s because the actual veracity of this claim is disputed.

This isn’t to say animals don’t occasionally wander into the plant and die, it’s just the the specific threat Puya chilensis poses to sheep is questioned. For example, there are many stories about farmers burning Puya chilensis on sight due to the threat they pose to their beloved sheep. Which is half true, with the stated explanation given by farmers for burning the plant being quite simply that it contains a highly flammable resin that makes it incredibly useful as tinder. For the same reason, farmers will preemptively burn the plant to avoid it accidentally catching fire and burning down their entire farm or something.

However, all this said, regardless of whether or not Puya chilensis intentionally kills animals to use their bodies as fertilisers, it is known to occasionally kill birds via the same method it supposedly kill sheep. Which personally we think is more impressive because birds have access to an entire extra axis of movement than sheep. We mean, literally all the birds have to do to avoid being killed is fly like 11 feet off the ground and the plant still catches them. Which makes us think that the fact this plant can’t move is a good thing since if it could it would probably be able to catch humans.