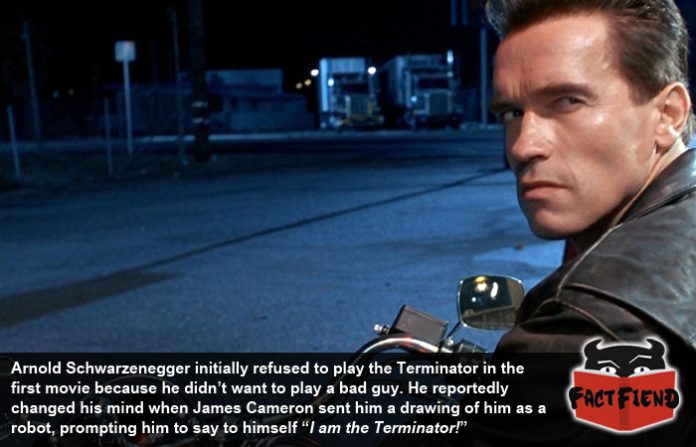 You see when pre-production on the movie started, the studio actually wanted to cast Schwarzenegger as Kyle Reese, the film’s hero. Cameron disagreed, citing the size of Schwarzenegger’s arms which would make whoever they ultimately cast as the Terminator look fucking adorable in comparison to his Herculean physique.

The studio persisted and arranged a meeting between the two men, a meeting Cameron planned to torpedo the shit out of by intentionally acting as dickish as possible towards Schwarzanegger during dinner. Allegedly, just before setting off for the meeting, Cameron told his roommate at the time that he might be a little late because he was going to pick a fight with Conan. Basically acknowledging that Schwarzenegger would probably end up punching his dick off or something.

However, as soon as Cameron sat down opposite Schwarzenegger all thoughts of sabotaging the meeting dissipated from his mind when he began studying the contours of his stunningly handsome face. As the two men spoke, Cameron began to realise that the Austrian Oak would be a fucking amazing Terminator. Cameron was further convinced when Schwarzenegger began speaking at length and with surprising eloquence about how he personally believed the Terminator should act, a character he felt a particular affinity for. Specifically Schwarzenegger noted how the Terminator should move as though it prioritised efficiency above all else, giving the example of how he was trained in the Austrian military to assemble and fire weapons without looking at them.

Though Schwarzenegger remained sceptical about the film’s prospects, reportedly referring to it as “some shit movie” in interviews from the time and reasoning to himself that the role was small enough that if the film bombed, it wouldn’t screw his career, he threw himself into the role. Along with spending hours at a firing range so he could fire an array of weapons without blinking and allowing himself to be sprayed with Vaseline before every take so he always looked really sweaty … 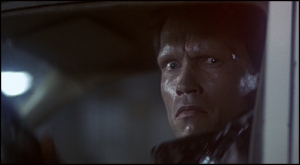 Schwarzenegger also willingly broke the law by breaking into parked cars in broad daylight because Cameron couldn’t afford a permit to film there and for one scene that called for him to be set on fire, let Cameron pour acid on his arm because it was cheaper than the paying a pyrotechnic expert. Because, hey, just because Schwarzenegger thought the movie was a piece of shit, it doesn’t mean he wasn’t willing to put his body on the line for it.