As The Simpsons once rightly said, you can’t diss the American flag because it partied on the moon. Apparently though the flag planted by Apollo 11 astronauts all those years ago partied too hard because it fell over roughly 10 seconds after Neil Armstrong and Buzz Aldrin took off.

As we’ve already explained in excruciatingly sarcastic detail, the flag Neil and Buzz planted on the Moon back in 1969 is one of the most controversial and iconic images to be released from the Apollo 11 mission. Controversial because idiots seem to think it proves that the whole Moon landing was staged and iconic, because fucking look at it! It’s clearly waving. In the air. 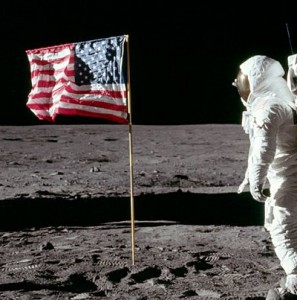 For anyone who thinks the Moon landing was staged and didn’t read our article on why that train of thought is just so full of shit, a “shittrain” if you will, the flag in that image isn’t waving, it’s just really crinkly. Something you can can see from these two images taken of the flag a few seconds apart proving that it was less capable of movement than comatose, overweight tortoise.

With that out of the way, lets talk about how that flag fell flat on its ass seconds after Buzz Aldrin and Neil Armstrong decided to peace the hell out. You see NASA wasn’t comfortable letting either astronaut move more than a hundred feet or so from the Lunar Module partly because they had no idea about the durability of their space suits and whether an astronaut who fell would be able to stand himself back up.

NASA were so concerned that Buzz or Neil might accidentally rip their space suit or fall down like a dumbass and die of hunger and shame in a lunar pit, that both men were warned to kneel only in an absolute emergency. It wasn’t until NASA examined the wear and tear on both of their suits when they returned that they were convinced that falling over on the Moon or kneeling down to pick up a dropped sample wouldn’t risk killing an astronaut.

Because Neil and Buzz had to be careful and weren’t allowed to venture too far away from the Lunar Module, they ended up putting the American flag right next to it, which looked great on TV but meant that when Buzz and Neil had to leave, the Module’s exhaust ended up blowing it over. Something Buzz relayed back to Mission Control, much to their annoyance.

NASA were so annoyed that the very symbol of America had been ineffectually blown over literally seconds after man left the Moon, they refused to believe it and denied that it had happened right until satellite imaging in 2012 proved that it no longer cast a shadow, indicating it was either a ghost flag or that it had fallen over. Since there’s no air on the Moon, they were forced to admit that the Buzz was right and that the Lunar Module had indeed ruined their middle finger to the cosmos.

We’re guessing that NASA must have at least believed Aldrin a little though because on every subsequent mission to the Moon’s surface, the astronauts were instructed to put the flag as far away from the Lunar Module as possible. You know, just in case.