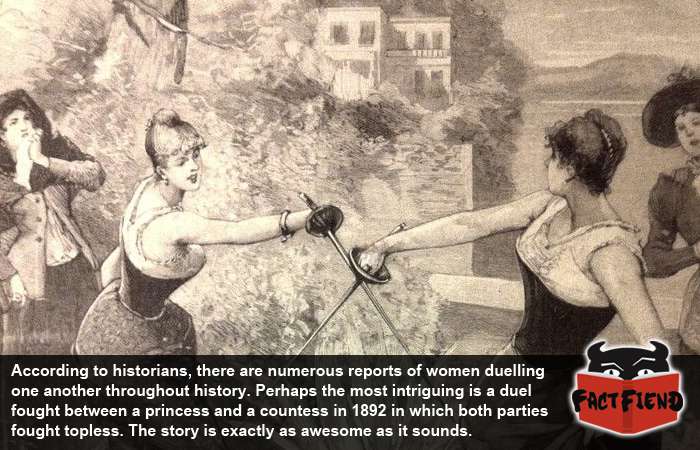 If that episode of the Simpsons where Homer spends the first 10 minutes slapping people across the face with a glove has taught us anything about duelling, it’s that both parties involved usually wear clothes. Apparently Princess Pauline von Metternich and Countess Kielmannsegg never got this memo because when they fought each other in 1892, the first thing they did was whip out their breasts.

According to experts on a part of history we can’t believe we were never told about in high school, though duels between women were rare, they did happen and they also kind of metal. For one thing, while duels between men were often fought over insults towards one’s family honor or over a loved one, duels between women could be sparked by the most trivial, mundane bullshit imaginable which only makes them that much more hilarious. For example, in 1792 a woman named Lady Braddock was having tea with a snobbish dipshit called, Mrs Elphinstone. During the course of their meeting, Elphinstone made a snide remark about Lady Braddock’s fading looks, which today would probably warrant a Facebook rant or at most, a swift backhand to the chops. Lady Braddock however was so incensed at this slight, that she challenged Elphinstone to a duel with pistols in Hyde Park. A still furious Braddock later won the duel by immediately shooting the hat off of Elphinstone’s fat head before running up and stabbing her in the arm. But we’re not finished yet, not content with nearly shooting Elphinstone in the face and stabbing her, Braddock then made Elphinstone write her a letter of apology using her bad arm. Because that is how you made sure people knew not to fuck with you back in the 18th century.

Other notable duels between women include one duel fought over a disagreement about someone’s age, one between two women who couldn’t decide who got to enter a room first and another about whose dress was most baller. By far the most trivial reason for a duel though was the one that resulted in the aforementioned topless throwdown between Princess Pauline and Countess Kielmannsegg. According to historians, their now legendary duel was fought over an argument about floral arrangement, you honestly can’t make this shit up. Hell even if we tried, we don’t know if we could come up with a more ridiculous reason to try and slap someone to death half-naked in the woods than “we had a stern disagreement about flowers” if we tried.

As for why these two women chose to right with their shoulder boulders hanging loose, that’s all thanks to Baroness Lubinska, the lady tasked with presiding over the duel itself. You see, Baroness Lubinska was well-versed in medicine and field surgery and she’d explained to both parties that most of the infections she’d witnessed were caused by dirty clothing getting stuck in a wound and as a result had advised both women to remove their upper garments to minimise the shit out of this potential risk. Adding that since only women were present at the duel and cameras hadn’t been invented yet, there was no need to be modest or worry about someone who didn’t already have their own set of boobs seeing them. Realising that the only people physically present at the duel were indeed all women, limited to just themselves, Baroness Lubinska and a handful of noble women that had been invited to serve as witnesses, Pauline and Kielmannsegg agreed that this was probably good idea and took off their shirts before assuming a fighting pose. Reminder, this actually happened.

After removing their clothing and having the rules explained to them one more time, both women then began slashing at each others faces with swords. While we don’t know why neither woman attempted to go for a boob stab, we do know that Princess Pauline won the duel after angrily driving her sword through the Countess’ forearm after suffering a small cut to her nose. As you’d expect, after having a sword plunged into her good sword arm, the Countess began screaming for help, which caused her entourage of guards who’d been ordered to stand really far away to bum rush the duel to attend to their mistress. Upon seeing the Countess’ guards dutifuly attending to their mistress, who remember, was fucking bleeding from a stab wound, Baroness Lubinska began beating the piss out of them with an umbrella while calling them perverts.

Again, just to reiterate, all of this happened.

Now, don’t you feel better knowing that at one point in history, two women decided to have a topless duel over floral arrangements and it ended with someone being slapped with an umbrella?