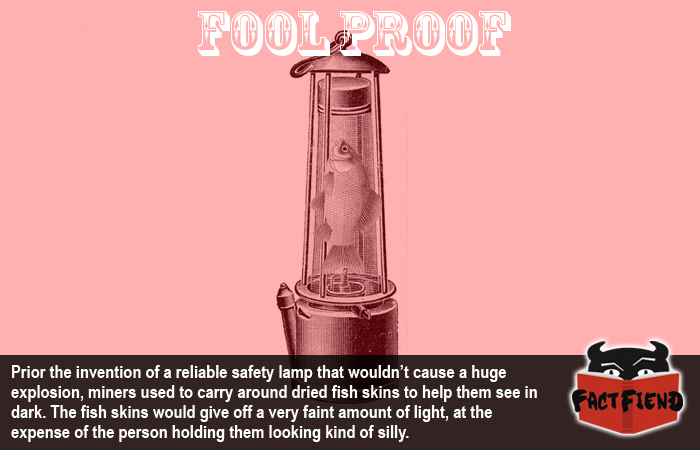 As weird as it is going to sound, to avoid dying in a fiery explosion, miners in the past used to carry around dead fish to help them see in the dark in relative, but rather smelly safety. No, this isn’t a joke, it’s something that really happened, why aren’t you taking this seriously?

Now obviously the first question in your mind if, how? Well, a little known fact about big-ass piles of dead fish is that if you let a big enough pile of them rot, they will give off a very faint, but still noticeable, greenish glow. Before you throw away all of your lightbulbs and run out to buy 80 fish and bucket, you should know that the smell will be absolutely terrible. In fact, miners in the past sometimes preferred to work in absolute darkness rather than go with the fish option.

The second question in your mind is probably, why? Well to answer that you have to understand that mining, especially a hundred years or so ago, was really dangerous and the risk of a “firedamp explosion”, (firedamp being a type of flammable gas often found in mines) was incredibly high. So even though things like candles and paraffin lamps were widely available at the time, no one wanted to use one and run the risk of exploding themselves to death.

This left miners with pretty much two options, work in the dark, or grab a bunch of fish. Now for the people who didn’t like the idea of working next to a rotting pile of dead fish, there was another, equally as fishy option. Skinning and then drying out a bunch of fish instead. You see, dried fish skins, like rotting fish also give off a form of bioluminescence known as phosphorescence. However, it’s noted that doing this only gave off a tiny amount of light so insignificant it was likened to working in the dark anyway.

But hey, if you had a choice between working in the dark and working while smelling of fish, what would you pick? Oh you’d work in the dark? So would we, but hey, if you’re ever caught in a zombie apocalypse you now know of a foolproof way to help you see when the electricity goes out and scare off bandits at the same time.