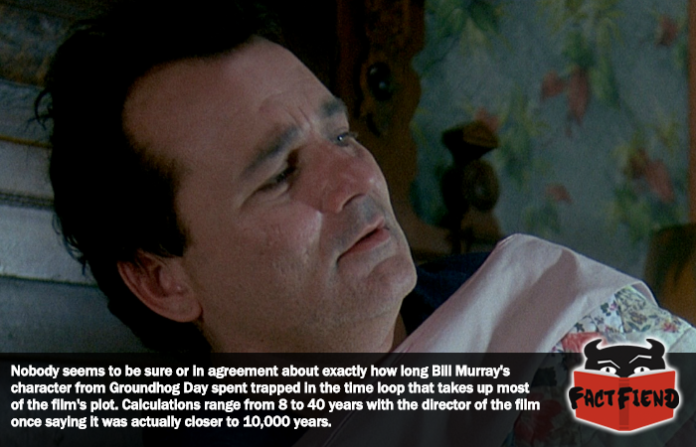 Groundhog Day is a film in which Bill Murray is cursed to live the same day over and over again for the crime of being a grouchy asshole. Exactly how long Murray’s character spends dicking around in chrono-limbo isn’t known, but theories range from 10 to 10,000 years.

First though, for anyone who doesn’t like things being explained there is a pseudo-explanation for why Bill Murray’s character, Phil, spends the majority of the run-time of Groundhog Day repeatedly punching the exact same man in the face for trying to be friendly …

Well according to an earlier version of the script that is functionally identical to the final product we got to see save for a few minor changes and cuts, Phil’s ex-girlfriend Stephanie gets so pissed off with him dumping her that she turns to the dark arts to get revenge and fuck him over. Which is, well, perfectly understandable.

This entire subplot as well as the character of Stephanie was cut from the movie, though some elements of the curse subplot remain. For example an idea that was suggested in this earlier script was that the curse would be broken if Phil found true love. While this isn’t explicitly referenced in the film, when Phil kisses Rita, a faint magical tinkling sound can be heard suggesting that either witchcraft is at play or someone fucked up the sound mix. 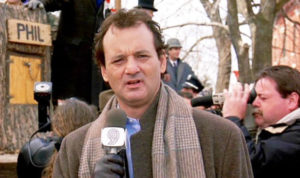 A key plot point in the movie is that Phil realises that being forced to relive the same day over and over again basically means he has infinite time. Time he decides to spend raising his XP and levelling up becoming amongst other things, a virtuoso pianist, master ice sculptor and sparkling conversationalist.

The thing is, skills like these aren’t developed overnight, with stuff like learning to play the piano to the same level as a master of the instrument taking a decade of focused study, at least. This has led to numerous fan calculations trying to work out the minimum amount of time it would take to learn everything Murray’s character did.

As you might expect, nobody seems to be in agreement with how long Phil spends in time-purgatory with guesses on the low end suggesting a timescale of about 8 years. A number the director of the film once caught wind of and immediately dismissed, telling an interviewer 40 years was a more reasonable estimate. 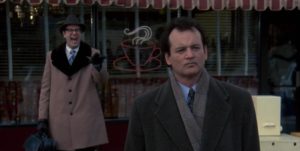 Here’s the thing though, that original script we mentioned explained that Phil actually spent some 10,000 years trapped re-living that one day. Something that would effectively make him a god-like being who has personally witnessed the time equivalent of an ice age and possesses the combined knowledge and experience of a thousand human lifetimes.

Which well, explains Murray’s eerily calmness towards the end of the film, he’s experienced all that there is to experience countless times and he’s ready for the warm embrace of the grave.