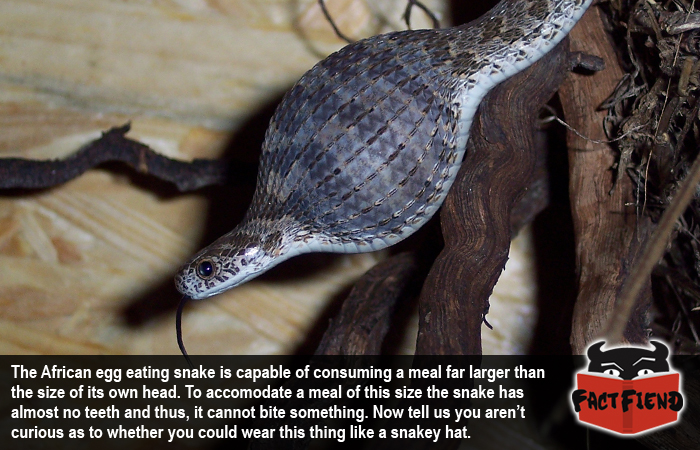 We don’t mean they scarf them down Rocky style by gingerly cracking them into a glass one by one, we mean they swallow those bad boys whole like a trooper, in spite of how stupid they look when they try to take that first bite.

Look at that little guy go, that egg is like 4 times bigger than his entire head and instead of head-butting the egg until it shatters or slapping it against a rock with his tail, he just slithered up to it and pushed the entire thing right into his face-hole like it wasn’t no thing. That’d be like ordering a 15 inch pizza then instead of cutting it into separate pieces, tipping the delivery boy extra to football punt it into the back of your throat. Actually, it’s nothing like that it’s more like asking someone to football punt a football into the back of your throat.

If you’re curious about why, like all the other egg eating animals, the snake doesn’t just smash the egg and eat the deliciousness within like a drunk person trying to covertly eat a Cadbury egg, you’re not alone. We were intrigued too and as it turns out, the snakes do smash the egg, after they’ve already eaten it.

You see, egg eating snakes don’t have any teeth to speak of, which believe it or not kind of makes swallowing eggs whole, a whole bunch easier. However, this unique trait effectively leaves the snakes with no way of crushing an egg before they eat it, so instead they’ve simply evolved with teeth on their insides. To explain, if you cut an egg eating snake open you’d see a bunch of tiny, bony protrusions along the inside of its spine. Far from being a stylistic choice, these bony protrusions are used by the snake to crush eggs once they’ve slid a suitable distance down its throat, like so.

Holy crap, that looks like purified sin trying to escape from a leather bag, that’s what Satan’s intestines look like when he eats chillies, if someone showed us the last 4 seconds of that GIF and told us it was living inside of us, right now, we’d hand that person a knife and immediately do a shot of Jack Daniels.

How on Earth can something with a name as innocent as the “egg eating snake” possibly be capable of something so mind-bendingly horrifying, and why are we now suddenly deathly curious about what would happen if we gave one of these things a Cadbury egg.