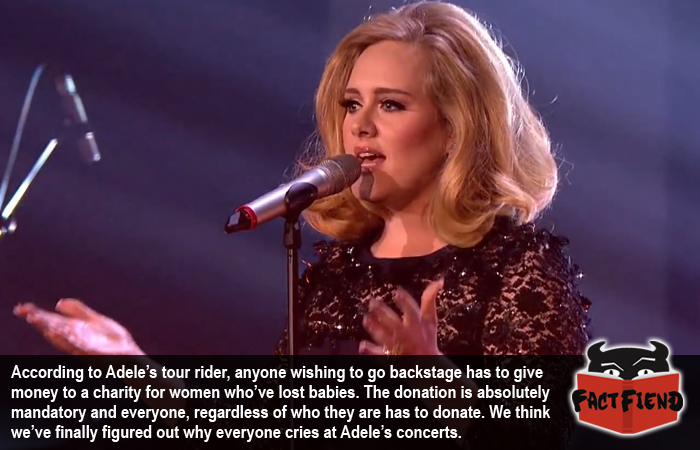 Yes, according to the official tour rider Adele hands out to places she’s going to perform, anyone, and we mean anyone, collecting free or complimentary tickets, even if they from Adele herself has to donate money to a charity for women who’ve lost babies. We’d go into more detail, but we try to keep things light around here, but if you feel like having someone punch your heart in the dick, we invite you to read their website for yourself.

Along with this, the rider also states that the venue has to match the donation for every ticket they give away as do venue staff trying to sneak in their friends for free. According to various sources by doing this Adele made literally thousands of dollars for the charity after just a few concerts. In case you’re wondering, even if the person collecting free tickets was given them by Adele herself, they’re given no option to opt out (read: be a total asshole). They either donate, or they’re not allowed to watch the concert. We’ve also heard a rumor that Adele herself commands birds to peck out the eardrums of people who refuse the donation so they don’t accidentally hear the concert as they’re being roughly thrown out and beaten by burly security guards.

Of course this is a beautiful, amazing thing and we’re not going to make fun of it, but we’re actually more curious about the people who refused the donation. We really want to know what kind of person wouldn’t hand over a few dollars to see Adele perform for free. More than anything we just want to touch them and see if they explode into a cloud of ashes, bats and day-old blood.