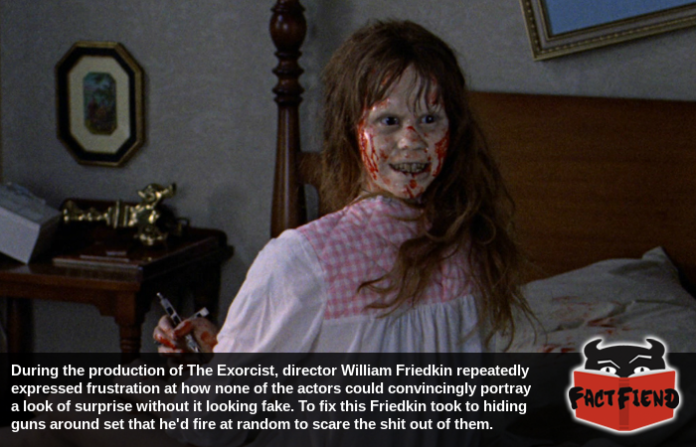 The Exorcist is a movie famous for being one of the scariest and most unsettling ever made. A fact often attributed to the seasoned acting chops of the everyone in the film but should also probably be credited to the many guns the film’s director had hidden around the set to fire whenever he couldn’t get the reaction he wanted.

That director was William Friedkin, an old-school Hollywood type known for his frequent use of guerrilla filmmaking techniques as well as the utilisation of real, tangible effects. Which is code for being a huge raging asshole to his cast and crew when they didn’t do what he wanted.

In regards to The Exorcist, one of the best examples of this was a scene calling for actress Ellen Burstyn to be hurled across the room by her demonically empowered daughter. An effect that was achived by having the actress pulled towards the floor by a hidden wire. After a few lacklustre takes Friedkin secretly told the guy in charge of pulling the wire to “really let Burstyn have it“.

As you might expect, Burstyn had no idea this was going to happen so her surprised reaction and resulting scream of pain was totally real, which is what Friedkin wanted. Here’s where shit gets kinda dark though because Burstyn ended up suffering a permanent spinal injury as a result of that effect.

In a similar vein, there’s a shot in the film where Linda Blair’s character is given an arteriogram, a horrific medical procedure that involves sticking a huge needle into a major artery. Friedkin once again wanted the reactions to this to be genuine, so rather than fake anything, got a bunch of doctors to perform the procedure for real. With the end result being so realistic (because it kinda was) some hospitals actually used it for training purposes to show how the procedure should be performed.

However, perhaps the thing Friedkin was most infamous for on set was his annoying habit of randomly shooting guns into the air. The idea being that doing so would elicit more realistic reactions from the cast and keep them constantly on edge. In the years since the film’s release Friedkin has been remarkably blasé about this fact when questioned about it, seeming more annoyed than anything that people would think randomly firing a gun into the air is weird. Often clarifying that the gun was only loaded with blanks and that other directors did it all the time. Which we guess is true but doesn’t change the fact that firing guns at actors is probably something a crazy asshole would do.