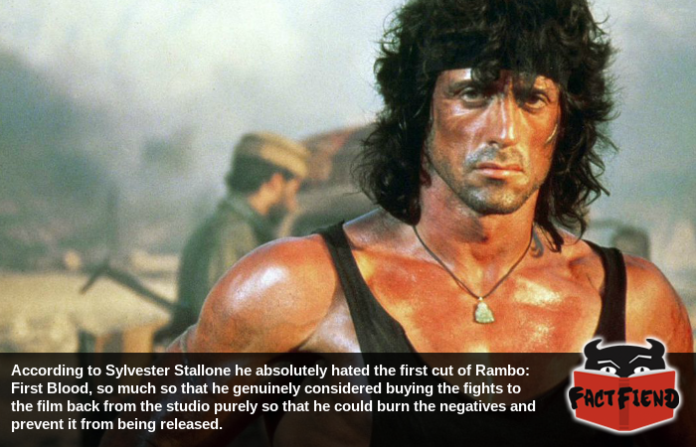 Rambo: First Blood is widely recognised as one of the movies that helped launch Sylvester Stallone’s career and established him as a highly bankable leading man. Strange then that Stallone himself reportedly hated the movie so much that he tried to destroy it so that it would never see the light of day.

So why did Stallone hate the movie that would end up defining his entire career? Well it’s important to understand that the version of First Blood we as an audience got to see wasn’t the version Stallone and everyone else working on the movie saw. In fact, this first, early cut of the film was so markedly different to the final cut that it could barely be considered to be the same movie.

For example Rambo was originally supposed to die at the end of the film, shooting himself in the gut after trying and failing to convince his former commanding officer to end his life for him. While this ending was in line with the ending of the book the film is based on, it wasn’t exactly the most satisfying ending to a film in which Rambo is a largely sympathetic character who just wants people to leave him the fuck alone. 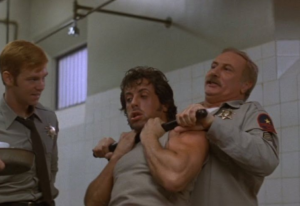 As an aside, the guy originally cast to play Rambo’s commanding officer, Colonel Sam Trautman, left production when the decision was made to deviate from this ending.

Moving on, another difference between this early cut and the final product was that it was literally twice as long, clocking in at a whopping 3 and a half hours. For reference the final cut was a much tighter 93 minutes. As you might imagine given that almost none of this extra footage has ever materialised since, it probably wasn’t all that interesting or necessary to the plot.

According to Stallone on the film’s commentary track, he absolutely hated this early cut and genuinely considered buying the rights to it just to bury it out of fear it would ruin his career if it was ever released. However, his opinion changed when he was instructed by the studio to sell some bigwig Hollywood types on the film. Why? Well according to Stallone, the studio, not wanting to force anyone to sit through 3 and a half hours of footage, gave him a 40 minute cut of the movie instead. This 40 minutes sizzle reel was reportedly so vastly superior to the original cut that Stallone’s opinion on the film was completely reversed. As a result, he approached the editing process with a renewed zeal and helped created the aforementioned and far better received, 93 minute long cut.

A move we think is fair to classify as, a pretty good one.