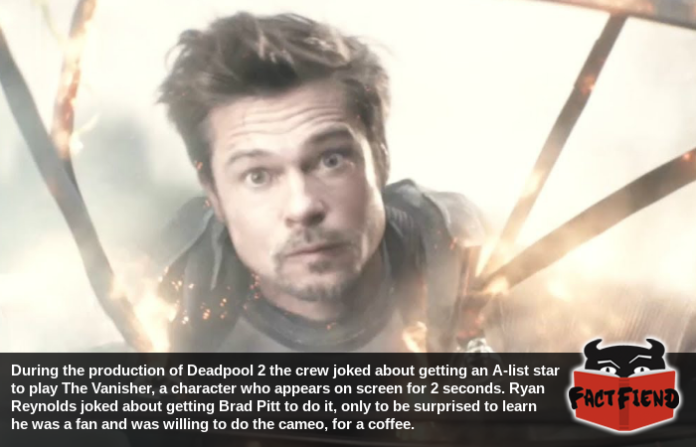 Brad Pitt is an actor so famous that he can basically pick and choose whatever roles he wants, a fact that has led to him being described as “the hardest get in Hollywood“. Something the producers of Deadpool 2 were well aware of when they offered him a 2 second cameo in the film.

To explain, there’s a character in Deadpool 2 called The Vanisher who neither speaks nor appears on-screen during the entire film due to the fact he’s both invisible and possibly very shy. The exception to this is a brief second and half shot where he’s electrocuted to death, during which we the audience can see that, holy shit, it’s Brad Fucking Pitt.

As funny as this is, you have to admit that it’s kinda amazing that the producers managed to land an actor as in-demand as Pitt for such a small role, right? Well, according to the people behind the film, The Vanisher was never envisioned as being a vehicle for a stupid cameo until the screenwriters figured it’d be funny to get someone well known to play such an inconsequential character (for anyone who hasn’t seen the film, The Vanisher, and indeed almost the entire X-Force, die before doing anything interesting or cool).

After some deliberation to figure out who was the “hardest get in Hollywood“, the screenwriters decided to put forward Brad Pitt as their choice for the role of a character who appears on screen for less than 2 seconds. Ryan Reynolds reportedly loved this idea and used his Hollywood super-hunk connections to reach out to Pitt, expecting to have to do at least some convincing to secure one of the most famous and in-demand actors in the industry. To Reynolds’ surprise though Pitt accepted the role immediately, telling the actor that his kids were fans of the first movie and he was happy to do anything they wanted, provided his schedule would allow it.

Here’s the really amazing part though because when the time came to discuss payment, Pitt told Reynolds that he’d be happy do the cameo in return for a single cup of coffee. Now while some sources have said that Pitt wanted a Starbucks coffee hand-delivered by Reynolds, according to Reynolds himself, Pitt simply asked for a cup of whatever coffee they had on set when he turned up to film. In effect, doing the cameo for free.

It gets better though because people have worked out that Pitt appears, or is at least visible, on screen for a mere 37 frames, totalling less than 2 seconds of total screen time. A statistic that would make Pitt’s cameo one of, if not the shortest cameos for an A-List actor in movie history. A record the film now holds, thanks to coffee.