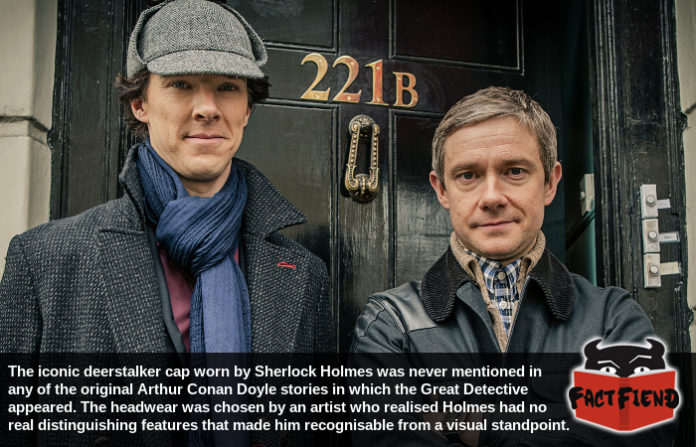 Few fictional character are as iconic and important to culture as Sherlock Holmes and the Great Detective is near-instantly recognisable from a distance due to his distinctive and rather fetching deerstalker cap. Or at least that’s what pop-culture would have you believe because Holmes never wore such a hat in any of the original stories he appeared in.

Throughout all of Arthur Conan Doyle’s original Holmes stories the Great Detective was only ever described as wearing something remotely close to a deerstalker cap in a single story. Specifically Silver Blaze in which Holmes is described as wearing “his ear-flapped travelling cap” by Watson at one point, a line that could be interpreted to suggest Holmes was wearing a deerstalker in that one instance, but is by no means proof he wore it all the time.

In fact, many of the original Conan Doyle short stories go out of their way to describe Holmes as being an acutely fashion conscious individual who was walked the streets of Victorian London like they were a cobbled, cat shit covered catwalk. Meaning it’s highly unlikely he would have ever worn a deerstalker hat during his day-to-day life lest he be mercilessly mocked by the press for committing such an egregious fashion faux pas. Something the recent BBC adaption of the character actually make a knowing nod to in one episode when the press takes the piss out of the detective for wearing a stupid looking hat after a picture emerges of him wearing a deerstalker and it’s assumed he wears it all the time because he’s weird or something. 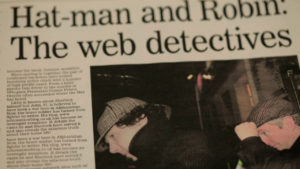 You see, as you probably guessed from the name, the deerstalker hat was a piece of headgear historically favoured by hunters. As a result, it’s not a piece of headgear you’d have ever seen sitting atop the head of a detective, fictional or otherwise, regardless of how fierce they looked wearing it. 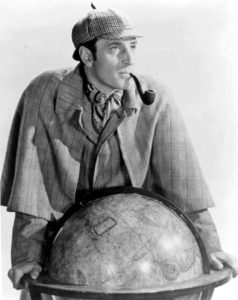 Throughout Conan Doyle’s original stories, Holmes’ clothing is seldom mentioned unless he’s in disguise and he is, for the most part, described as being meticulous well-groomed and neatly dressed. Hardly a lot to go on for an aspiring actor wishing to portray him on stage.

As for his appearance, Holmes is described in the original short stories as being a serious looking man with a grey eyes, black hair and a crooked “hawk-like” nose” with his most prominent feature being that he’s a little over 6 feet tall. While this is all good for a book or short story, it posed a problem for artists who needed to draw Holmes as there was little they could do to make it immediately obvious which character was Holmes save for making him tower over everyone else in shot like a gangly giraffe-man. An additional issue was that even with such a detailed description, most fans invariably conjured their own image of what the Great Detective looked like. Also, all the drawings were in black and white which meant that everyone had black hair and grey eyes anyway. In short, they were up shit creek with a paddle made of one-ply toilet paper.

This all changed though when artist Sidney Paget drew the following image to accompany the story The Boscombe Valley Mystery. 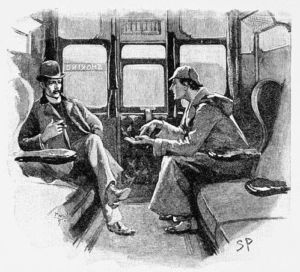 Because the story was set in the countryside Paget decided to draw Holmes wearing a deerstalker cap and an Inverness pimp cape and promptly gave it no more thought. To Paget’s surprise the drawing quickly went on to become one of the most well-known depictions of Holmes and he dutifully made it the Detective’s regular attire for solving mysteries set outside of London. Other artists drawing Holmes are noted to have then aped Paget’s interpretation of Holmes, leading to the deerstalker look being closely associated with the character. You know, even though the books never mentioned him wearing anything remotely like that.

The look of Holmes was later cemented in the minds of the public by actor William Gillette who donned a deerstalker hat while portraying Holmes on stage. Exactly why Gillette chose to don the hat on stage isn’t clear, but it’s commonly assumed that he wore it so that Holmes was immediately identifiable from afar as soon as he walked on stage. Gillette is also credited with popularising the idea of Holmes smoking a large curved pipe (in the original books it was just a regular, straight pipe), supposedly so that he could deliver his lines while smoking.