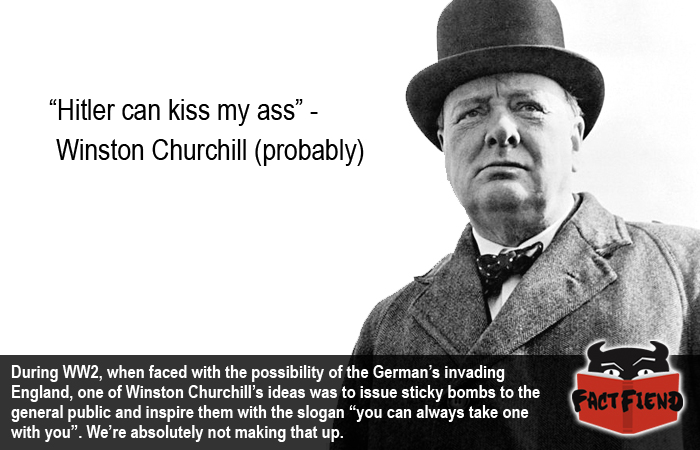 Though history tells us that Germany never managed to set foot in the UK during WW2, that doesn’t mean the UK didn’t plan for the eventuality of it happening. For example, did you know that the stupidly popular “keep calm and carry on” poster was actually invented to keep people’s morale up and stop them going crazy when their home’s were being bombed to shit. Speaking of crazy, here’s what Churchill had planned.

Churchill, like many world leaders during WW2, had a rather romanticized version of how he saw his country reacting to being invaded. Churchill seriously envisioned the men and women of Britain fighting to the last man, running headlong towards German tanks on glorious suicide missions. Rather than the far more likely scenario of people dying in agony as the German war machine curbstomped its way across mile after mile of fresh British countryside. Hell, he even though that the brave men and women of Britain would make use of his favourite war-time weapon, the sticky bomb, the end the lives of any German soldiers stupid enough to invade ye olde Blighty.

This is because for some reason, Churchill had a huge unexplainable hard-on for the sticky bomb. We’d like to point out that Churchill felt the sticky bomb was the weapon that would save Britiain even though in multiple tests they’d proven to be hugely unreliable, unwieldy and dangerous to the person using them For example sticky bombs wouldn’t stick to a vertical surface, like the one found on the side of a tank, but they would stick to a person’s clothes, effectively sentencing them to death at their own hand. Despite this fucking huge flaw, Churchill still didn’t see a problem with them, because if you managed to stick one on a tank and not yourself, they did kind of work.

When confronted with the information that the bombs only had an accurate range of around 20 feet, limiting them to either point blank range or suicidal charges across open ground while Iron Maiden songs exploded through a wormhole, Churchill wasn’t at all concerned. As he later recalled in one of his books, he already had an idea for a slogan to sell the idea of glorious suicide via sticky bomb to the British public if Germany ever invaded. “You can always take one with you“.

We’d make a smart-ass remark, but we’re stumped as to how we could ever top something that crazy and beautiful without setting fire to a horse.

Churchill also had some pretty boss quotes when he wasn’t being totally insane.