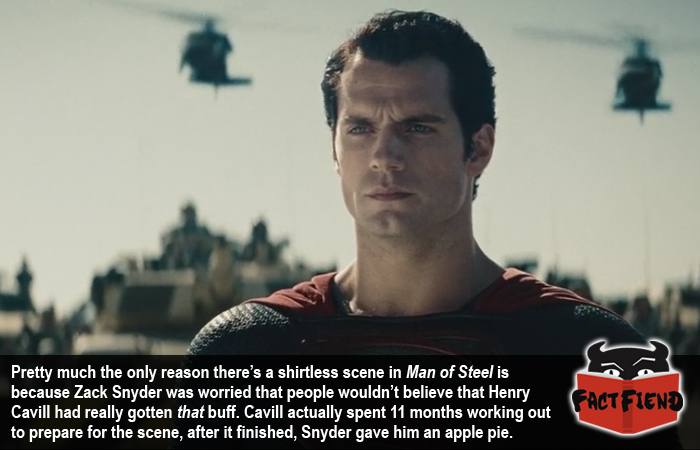 As we’ve discussed before, getting in shape to play a comic book superhero is a hell of a lot of work because superheroes are often portrayed as being at the peak of physical fitness and not sad sacks of shit like the rest of us. So when Henry Cavill was cast to play Superman, he pretty much had to attain a level of physical fitness thanks to the legal testosterone pills he take, only rivalled by professional athletes and really serious cosplayers.

All in all, Cavill spent just under a year in the gym working to hone his body into the lump of carved granite we all saw on screen and then immediately forgot about. Now in the world of superhero movies bulking the fuck up isn’t really that uncommon, part of the fun of casting people to play superheroes is watching them turn into a Greek statue in front of your eyes. Christian Bale did it. Chris Pratt did it. Hell, even Nic Cage did it.

The difference here though was that none of those guys were supposed to be playing a character who’s only defining trait is that he’s perfect in every way, Cavill was. Which is why for much of the time Cavill spent filming, he did so with a body fat level of just 5-7%. When time for the film’s only two shirtless scenes rolled around, that percentage dropped to just 3%

So why did Cavill got to such an extreme level of effort for what eventually amount to 30 seconds of film? Well, two reasons, one, because he wanted to accurately portray Superman and felt that he owed it to fans to push himself to his limit and two, because Zack Snyder was genuinely worried that nobody would believe it was Cavill’s actual torso in the Superman suit. Because, to be fair, Cavill really does look like he’s smuggling grapefruit in that thing.

Snyder knew that unless he put a shirtless scene into the movie, fans would just assume that the suit was padded with rubber or that they’d just CGI’d a Superman-esque physique onto Cavill’s pale, saggy man-body. Which would have completely undermined the 11 months of non-stop exercise Cavill had undergone to play the character. It just sucks for Cavill that one of the only two scenes his appears topless in is full of shitty, ab-obscuring CGI anyway.

According to Cavill’s personal trainer, the actor was routinely brought to his knees by the gruelling training regime he was put on and he still pushed on through and demanded to train even harder when he noticed that his abs weren’t yet at peak panty-dropping levels.

In fact, Cavill’s Herculean dedication to achieving an essentially perfect body, was so inspiring that after he finished his shirtless scenes, Zack Snyder walked in and have him huge apple pie and a tub of ice cream, which Cavill promptly ate in his trailer before ordering a pizza. Something we absolutely don’t judge him for.