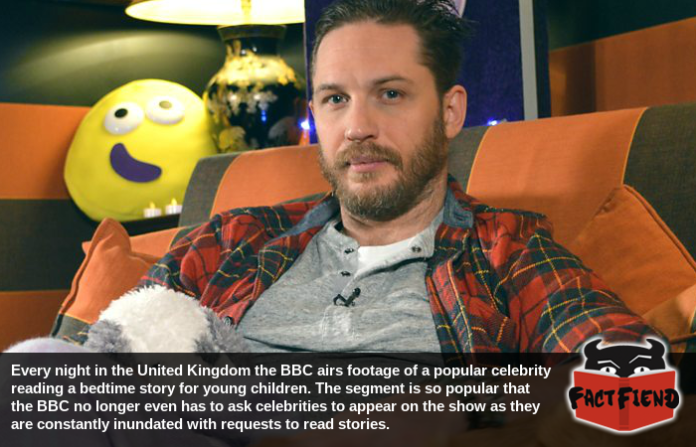 The bedtime story is a time-honoured tradition enjoyed by young children and parents the world over. The thing is, not every parent has the time to read their children a story, which is presumably why the BBC has had a near-endless stream of celebrities do it for them for the past 15 years.

Known simply as the Bedtime Story and airing at around 7pm each night, the segment is among the most popular pieces of recurring content created by the BBC and has been for over a decade. Created for a child-centric offshoot of the BBC called Cbeebies, the general idea behind the segment is to help children watching at home settle before bed (the segment is literally the last thing the channel airs each day) and for that you need a commanding, powerful voice that will let kids know, it’s time to go the fuck to sleep.

Luckily the segment is aired on a channel owned by one of the most respected media institutions in the world which affords them a great deal of pull when it comes to booking talent. Examples of said talent include actors esteemed as Patrick Stewart, musicians as legendary as Sir Elton John an even a fucking astronaut who rather fittingly, opted read his story from space. 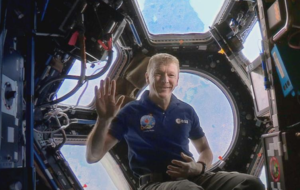 According to the BBC, everyone who appears on the show is paid a token amount for their time and is allowed to personalise their appearance to a degree. A fact which probably explains why when Tom Hardy appeared on the show he chose to bring his dog and read his chosen story from beneath the swaggest blanket known to man. 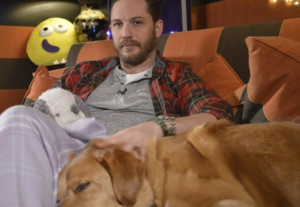 Speaking of Tom Hardy you’ve probably wondered why the fuck the BBC gets massive celebrities to read bedtime stories for children who probably don’t even know who the fuck they are. Well, the answer is that while kids might not care, parents do and the BBC is keenly aware that if a given mum knows Tom Hardy or Chris Evans is going to be reading a story that night, they might just check it out with their kid and presumably, a glass of wine or three. 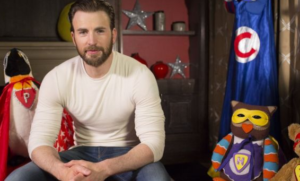 Curiously, while the BBC had to seek celebrities out at first, after a couple of years they kind of had to stop doing that as celebrities began seeking them out to appear on the show. As an idea of how many celebrities have asked to be on the show, the BBC reportedly turns down numerous requests to read a story per month. Perhaps the most amusing example of this being actor Stephen Graham who had multiple requests to appear on the show denied. A fact he attributed to his numerous roles in less than child-friendly movies but was likely just because the BBC couldn’t accommodate his schedule. Something we say because he did eventually appear on the show to read a story about an ogre who learns yoga.

According to those in the know, the BBC has no plans to stop the nightly ritual and has its eyes set on even bigger celebrities to appear on the show, with one producers describing their approach as “go big or go home”. When asked who the fucking they could possibly get on the show who was bigger than Sir Elton John, the producer responded simply “royalty”. Meaning there’s a very real chance that if someone at the BBC gets their way in the near future, the Queen might appear on TV to read a story for children flanked by endless corgis. Which is well, a pretty amazing mental image if we’re honest.