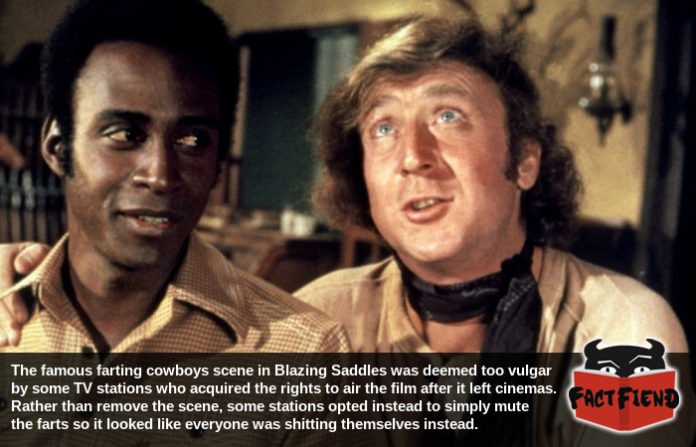 It’s often said that fart jokes are one of the lowest forms of humor right alongside quoting Family Guy instead of making an original observation and Family Guy. The film Blazing Saddles sought to challenge that stereotype by including the Citizen Kane of fart jokes. Something it turns out many TV stations simply couldn’t deal with.

If you’re not familiar with the scene or the film, basically Blazing Saddles is a satirical swipe at westerns and their mythologising of the Wild West written by comedic juggernaut, Mel Brooks. The film is famous for a couple of things, the scene where a guy cold cocks a horse, it’s repeated use of the N-word and a scene where half a dozen cowboys eat a shit ton of beans and fart their assholes off.

For people who haven’t seen the film one of the things listed in that previous sentence probably seems a little out of place for a comedy movie so we should probably address that before moving on. In short the film contains frequent uses of the N-word, mostly directed at actor Cleavon Little who plays a black sheriff within the context of the film.

The use of the epithet is played for laughs and was intended by Brooks to be a jab at how traditional westerns often glossed over the fact people back then were like, super racist. Brooks carefully ran each use of the N-word in the script past both Little and Richard Pryor who helped write the screenplay and noted that he received numerous letters from black fans praising his gifted handling of what in the hands of a less talented comedian, would come across as him just being a racist shithead.

Brooks would later state that after the film his cinemas he received hundreds of letters of complaint about the film’s use of the word but decided to ignore most of them because they were all from white people.

Moving back to the more important issue of farts, Brooks was similarly worried about having a scene so densely packed with audible flatulence and the potential offence it may cause. However he soon got over this when he remembered that he’d signed a contract giving him total and absolute creative freedom to include whatever content he damn well felt like. So, rather than asking sound engineers to tone down or remove any of the fart noises, Brooks demanded they be made even louder. Brooks’ apparently fought so hard to include the scene he was annoyed about the fact most old westerns showed cowboys eating beans, but never the unpleasant aftermath of what an all bean diet does to a human colon.

The scene quickly became one the film’s most iconic which posed a problem for some TV stations when they acquired the rights to air it a few years later. You see, they cutting the scene wholesale would likely anger fans of the original film whereas leaving it in would probably result in more sensitive viewers (read:helicopter parents with nothing better to do) writing in to complain about it. Stuck between a farting rock and a hard place, some stations showing Blazing Saddles tried to appease everyone by showing the scene in its entirety while muting every single fart noise. This they felt was somehow better, despite it making the scene look like every cowboy, instead of farting, was now violently shitting out their insides in gut wrenching silence. 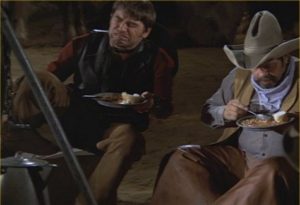 For some reason these same stations had no problem airing uncensored uses of the N-word, so we guess we’ll call this one an overall victory for social progress