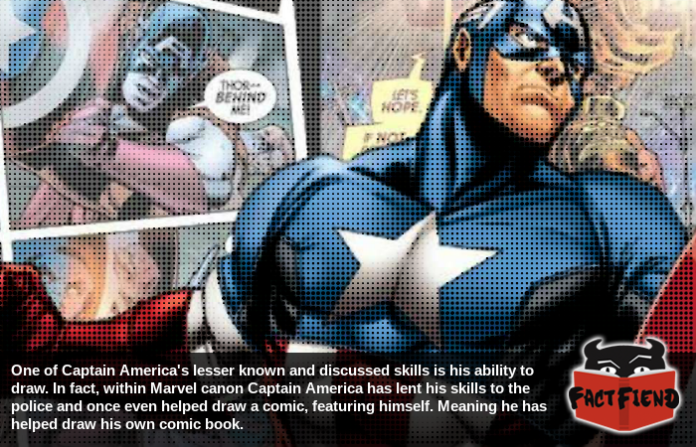 As one of the best known and loved comic characters ever created, there’s little about Captain America basic biography people who give even the remotest of shits about comics don’t know. This said, there is one thing about Cap that will likely surprise fans of the character, that he once drew one of his own comics.

Before that though you’re probably already familiar with Captain America’s other powers which include enhanced, near-superhuman physiology and brain function as a direct result of being injected with experimental turbo-steroids. In fact, according to the comics, Captain America is literally as strong, agile and durable as it is physically possible for a human being to be. In effect making him the literal, perfect human specimen.

In addition, the super soldier serum he was injected with enhances his brain function too, allowing his mind to work beyond the capabilities of any human, amplifying both his reflexes and ability to absorb knowledge ten fold. On top of all this Cap also ages more slowly, heals more quickly and has senses sharper than an origami leopard.

However, one thing that the super soldier serum seemingly didn’t impact was Cap’s drawing ability, something he’s been good at long before he was able to bench half a fucking ton.

You see, according to the comics Captain America has always possessed an affinity for the arts and drawing is actually one of the the few things he’s known to do for fun besides working out or hailing Hydra. Something the live-action films have made numerous nods to as an Easter egg of sorts for fans of the character.

The thing is though, Cap isn’t just an art hobbyist (though he does sometimes just draw to relax) and he has occasionally lent his skills to the police as a sketch artist when he’s not doing Avengers stuff. Which along with being kind of adorable, is very on-brand because it means that Captain America even uses his fucking hobbies for justice.

When he’s not using his art skills to nail bad guys or relax, Captain America has even been known to enter the occasional competition. Winning at least one award for his artistic talents. Easily the most impressive feat of artistic skill attributed to Cap though is his occasional work on comics. 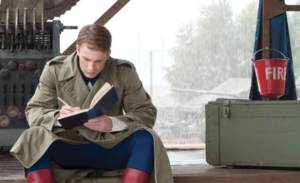 To explain, within the mainline continuity of Marvel’s 616 universe there exists a comic publisher called, well, Marvel Comics. Now because fictional Marvel exists in a universe where superheroes exist it’s noted that they just publish dramatised versions of events that actually happened in their world. Including ones featuring Captain America.

Amusingly, as a nod to Cap’s talent as an artist, several of these comics note that guest artwork was done by none other than Steve Rogers, aka, Captain America. Meaning that it is official Marvel canon that the greatest hero in that universe occasionally helps draw his own comics and is presumably paid a not insignificant fee to draw himself kicking the shit out of his rogues gallery. Which in addition to being kinda neat, is also very funny because it potentially means that Steve Rogers drew fan art of himself beating up Hitler. 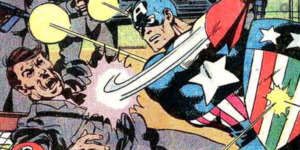