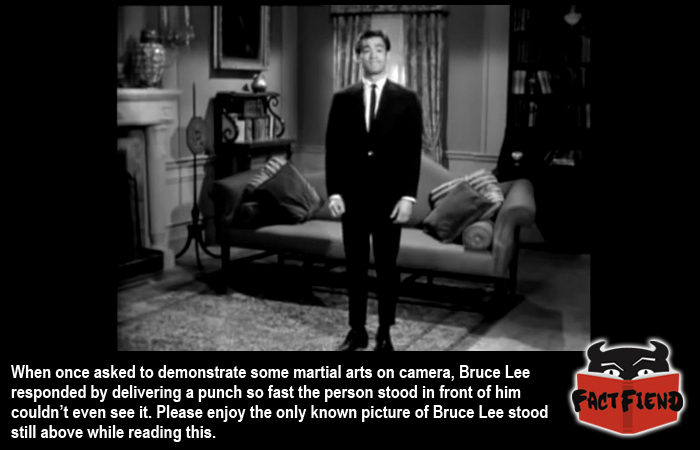 Bruce Lee is easily one of the single most physically fit human beings to have ever lived and we will never stop talking about how awesome he was because the day we do that is the day his ghosts comes to get us. With that in mind, today we’re discussing how his punches were so fast that regular people couldn’t even see them.

Though today Lee is known as a phenomenal martial artist capable of punching the balls clean off of a fly if he really wanted to, back in the day, by which we mean before the world was made aware of Bruce Lee’s vast collection of fly balls, people were sceptical of his skills and often asked him to demonstrate them.

Now there are many, many awesome stories of the cool stuff Bruce Lee used to do just to show off and we invite you to read about them. Before that though, we’d like you to take a minute out of your day to show you this GIF of Bruce Lee throwing a punch so fast the person it’s aimed at doesn’t react at all.

Now initially it may seem like Bruce Lee isn’t moving at all in that GIF and there’s a reason for that. It’s because Bruce Lee is punching without being asked to slow down first. Some of you reading may be aware that there’s a rumor out there that states that all of Bruce Lee’s movies had to be slowed down so that you could see him move. Well we’re glad to be the ones to tell you that, that isn’t a rumor, it’s a verifiable fact, Bruce Lee really did move too fast for cameras of the day to film. Weirdly though, there’s a facet of that story that often goes unmentioned, that Bruce Lee had to be slowed down twice.

To explain, Bruce Lee himself had to slow himself down before the camera even started rolling because when he punched as fast as he could, or as fast as he was allowed to before physics asked him to stop taking the piss, cameras couldn’t detect his movements at all. Bruce Lee had to slow down his movements just so they could be captured on camera then the footage had to be slowed down again so it didn’t look like Bruce Lee had magic powers.

In fact, early footage of Lee in The Green Hornet had to be re-filmed because when it was later played back, Lee’s movements were so fast all of his opponents just fell over and Lee never appeared to move at all. Oddly, the show producers didn’t find the idea of a GUY WHO PUNCHED WITH HIS MIND an interesting concept and Lee was asked to slow down his movements in future takes.

Oh and in case you’re thinking that the guy up there is just really freaking chill about Bruce Lee punching the air in front of his face, he reacted just fine to a slower punch just a second before that. It’s the reason you see the guy moving at the start of the above GIF, he’s still reeling from a punch Bruce Lee threw 5 seconds ago.