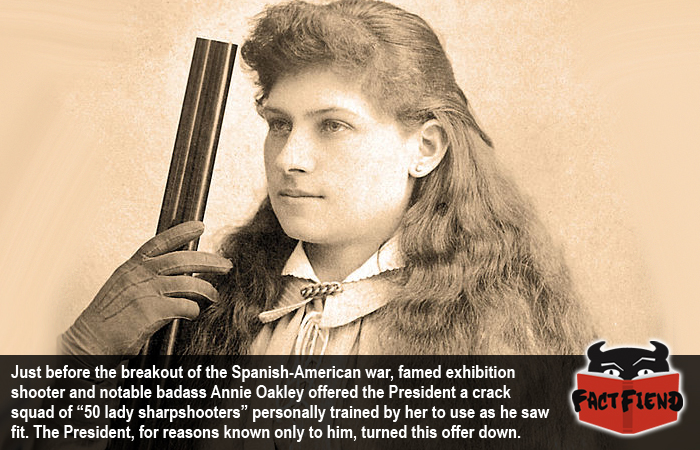 Annie Oakley is a name synonymous with the world of trick-shooting. Known as one of the finest shots and in all of history, Oakley commanded a great deal of respect during her lifetime. Weirdly though, when she offered her services to her country, she was turned down. Twice.

For those of you whose history teacher’s decided to gloss over the utter badass that was Annie Oakley, we’ll explain to you what made this unassuming woman so famous and more importantly, deadly. Firstly she was an expert hunter and trapper who’d had spent her formative teenage years shooting game to provide for her family. Secondly, she boasted the following repertoire of tricks:

Oakley essentially spent her entire life around guns and had spent more time shooting things than a selfie obsessed teenager with an iPhone. By the time she reached her mid 20’s Oakley was instantly recognisable thanks to the literal chestful of shooting medals she’d wear everywhere she went.

One of the few things Oakley loved more than shooting was training other women to do the same and it’s commonly believed that throughout her illustrious career as a trick shooter, she taught anywhere upwards of 15,000 women how to handle and fire a gun. Oakley was a firm believer in women’s rights and was in the mindset that women could be an effective military asset if given the proper training. Which is presumably why she took it upon herself to teach so many women how to shoot things in the dick from 300 yards.

Oakley was so strongly in favour of a female presence in the military that when she heard rumblings of a potential Spanish-American war in 1898, she personally penned a letter to then President William McKinley offering the services of an elite squad of 50 female sharpshooters trained by her own hand. McKinley politely turned down the offer of his own team of elite female snipers because he apparently wanted America’s army to be extra lame that year.

When World War 1 rolled around, Oakley, curious if the Governments position on hiring a team of badass female snipers had changed, wrote another letter to another fucking President. Again offering a team of proficient female marksman hand-picked (and trained) by her. Then President Woodrow Wilson, like his bitch-ass predecessor, turned down Oakley’s offer, rebuffing her for a second time because, well we don’t know why because Oakley’s offer sounded fucking awesome.

Oakley continued trick-shooting and promoting female equality until the day she died. At the age of 62, Oakley was still reportedly able to still hit 100 targets in a row without missing. And yet two Presidents didn’t see how a team of women like that could have been a useful wartime asset. Figures.