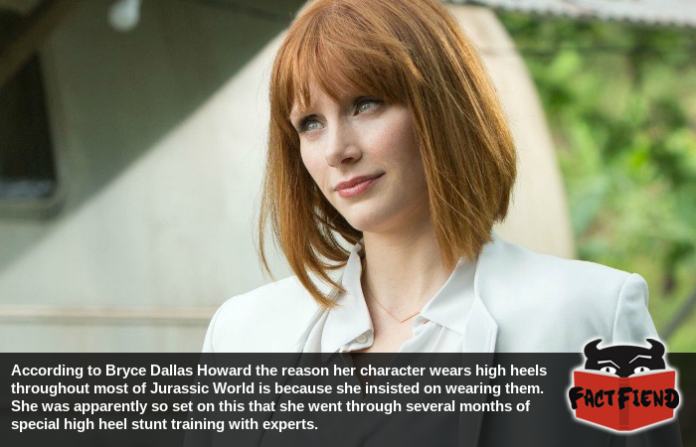 One of the most pervasive criticisms of the film Jurassic World, other than that it suck a whole bunch of dong, is that Bryce Dallas Howard’s character never takes off her high heels even when she’s being chased by 14 tons of dinosaur. As it turns out the producers through this was stupid too and only left scenes of the character wearing them in the film at Dallas Howard’s insistence.

Now if you haven’t seen Jurassic World, which is totally understandable by the way, throughout the film Bryce Dallas Howard’s character, Claire Dearing, wears a pair of pristine Colgate-white high heels throughout the basically the entire thing. While this clothing choice is thematically appropriate when Dallas Howard is playing a high-powered businesswoman power-stancing her way through meetings and shit, her penchant for heels makes less sense when she’s trying to outrun a fucking dinosaur. 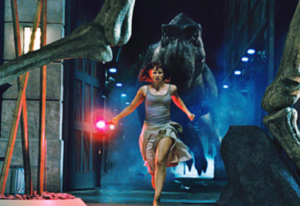 As you can imagine, critics mercilessly mocked scenes of Dallas Howard casually outrunning an ancient apex predator dressed for the catwalk. So much so that the sequel to the film makes a point of showing that Dallas Howard’s character is wearing more appropriate footwear. Or as appropriate as footwear can be for hunting dinosaurs.

The thing is though, as much as those scenes were made fun of, Dallas Howard actually did everything shown on screen for real in high heels. Why? Well according to the actress she was absolutely insistent that her character never take those heels off in the first film, seeing them as a kind of armour that protected her femininity or some shit. This was apparently something Dallas Howard absolutely refused to budge on, much to the annoyance of producers who rightfully pointed out how stupid it would look for her to be cartwheeling through jungle in high heels.

In response Dallas Howard agreed to take part in special “high heels stunt training” so that she wouldn’t fall over and break her neck and so that she would be able to move around in them as naturally as someone would a pair of sneakers. As a direct result of this training Dallas Howard was able to do every stunt required of her, for real, without any camera trickery whilst still wearing the heels. Meaning that those scenes were actually some of the most realistic in the film, despite them looking the most ridiculous.