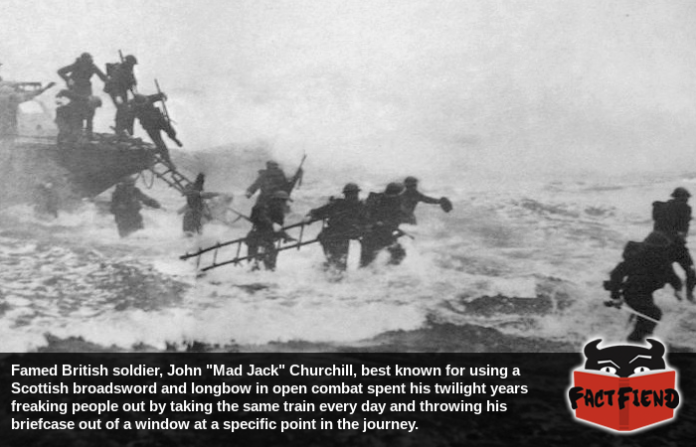 The military career of the British soldier known as Mad Jack Churchill is an oxymoron in the sense that it has been expansively covered online by websites that all try and talk about him like you’ve never heard the story of the soldier who fought in WW2 with a sword and longbow. So to avoid that lets talk about how he’d frisbee his own briefcase out of a moving train every day on his way home from work.

Before that though, if you have somehow avoided ever learning about Jack Churchill, he was a British army officer famous for carrying a broadsword and longbow into battle against the axis war machine. Neither of which he ever used for anything beyond intimidation, contrary to what you may have heard from other websites who don’t bother to do any research.

For example, a popular story about Churchill is that he has the only confirmed longbow kill of WW2, which sure sounds cool but was something Churchill himself repeatedly denied everytime someone asked him about it. Explaining that while he sure as shit planned on killing some Nazis with his trusty longbow, he was never actually able to do that because it was run over by a truck like 4 days into the war.

Churchill is also credited with singlehandedly capturing 40 Nazis with nothing more than a sword, which while more accurate than the longbow thing, isn’t exactly the whole story. For starters, while that sentence probably conjures up an image of Churchill running towards the enemy in broad daylight with his sword in hand and a throbbing erection, the whole thing happened at the dead of night.

Churchill also had help from another soldier who kept watch on each of the Nazis he captured, save for one who Churchill led around at gunpoint and forced to lure each of his comrades out into the open whereupon he’d threaten them into dropping their weapons with his giant sword. Which, while still all kinds of impressive, because Churchill did manage to capture an opposing force that outnumbered him 20 to 1, he did so more through subterfuge and guile than balls out bravado.

Moving on, Churchill’s exploits after the war are less well known, which is a shame because they’re kind of amazing. For example, shortly after the war ended Churchill took up surfing and became the first person to ride the Severn bore, a giant wave that an reach as high as 15 feet on a specially constructed 16 foot long surfboard. Something locals familiar with the treacherous wave advised Churchill against, prompting a bemused Churchill to respond simply, “I’ll be alright.” Something that makes sense when you realise Churchill would make sure captured enemy heavy guns were empty by staring directly down the barrel and yelling. 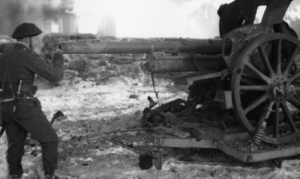 By far the most hilarious thing Churchill would do though occurred in his later years when he begrudgingly took a desk job with the Ministry of Defence. Keen to liven up his daily commute, Churchill took to angrily hurling his briefcase out of the window every single day at a specific point in the journey, only to return the next day with seemingly the exact same briefcase. Something that, as you may imagine, confused the shit out of everyone else who took that train. When asked about this privately Churchill explained that he had figured out that the train went past his house and that by throwing his briefcase out of the window at a very specific point, it would land right in his back garden. Meaning he didn’t need to carry it from the station.

However, Churchill never bothered to explain this to anyone else who rode the train, meaning that, to them, it looked like he was frisbeeing his briefcase out of the window for no apparent reason and then buying another one to use the next day. Something that no doubt caused Churchill endless amusement in his twilight years and allows us to talk about him without repeating what everyone else online has already said.