Freddie Mercury was fucking awesome and lived a life that would be genuinely interesting to see adapted to the big screen. Sadly though we’ll likely never get the kind of biopic Mercury deserves because the rest of Queen are worried about it affecting their image.

A biopic for Freddie Mercury has been in the works since about 2010 and up until very recently, Sacha Baron Cohen, you know this guy … 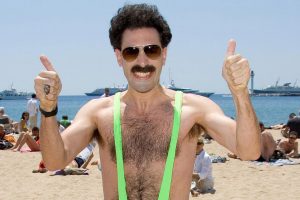 Was set to play the man himself. You may think that sounds like an odd choice but that’s almost certainly because your only knowledge of what Cohen looks like when he’s intentionally dressed like an idiot. In reality the actor bears a striking bears a striking physical resemblance to Mercury.

Those working behind the scenes on the movie have also spoke highly of Cohen’s singing ability, noting that he can hit and sustain high notes almost as well as Mercury could. In addition to this, Cohen is a huge fan of the late singer and has let it be known that his only goal was to give his main man Freddie the tribute he deserves.

Specifically, Cohen wanted to show the wild side of Mercury we only heard about in the tabloids and websites like this, the man who hired little people to walk around his parties with plates of cocaine strapped to their heads, the man who destroyed on entire hotel for his birthday party, the man who took Princess fucking Diana to a gay bar just because he could.

In short, Cohen wanted to make a Freddie Mercury movie and he assumed that Queen wanted to, too. However, Cohen was shook to his core when a member of the band he refused to name for reasons that will become clear in about 8 seconds sauntered over to him during pre-production and said “You know, this is such a great movie because it’s got such an amazing thing that happens in the middle.”

Cohen innocently asked the band member to elaborate and stood in abject shock as they explained how awesome it was going to be for Mercury to die in the middle of the movie so that it could shift focus to show what the audience really wanted to see, how Queen carried on without him. Cohen angrily confronted the band member telling them quite matter-of-factly “Not one person is going to see a movie where the lead character dies from Aids and then you see how the band carries on.” leaving production shortly thereafter due to “creative differences” corporate doublespeak for “left while flipping everyone off”.

According to later interviews with Cohen, the band didn’t want to tarnish the Queen’s legacy by talking about all of the cool shit Mercury did and as such wanted to the focal point of a movie specifically about him to be about they heroically overcame him dying of Aids.

What makes this worse is that the movie Cohen wanted to make, the one that would have have cocaine helmet-wearing little people and a cameo from Darth Vader was exactly the kind of movie Mercury would have liked made about him. Shortly before his death, Mercurcy explicitly told the his manager that they could do whatever the fuck they wanted with his image, legacy and music with a single stipulation, “never make me boring“. A request the band have basically spent the last half decade shitting all over by refusing to let a movie with Wolf of Wall Street-esque debauchery starring Borat because they don’t want to look bad.

Just as an FYI to the remaining members of Queen, people know that Freddie Mercury did a ton of crazy shit behind the scenes, that’s why people love him. He’s the only member of the band most people even recognise and he’s been dead for nearly 30 years. If you’re worried about protecting your legacy, maybe do what Motörhead did and let the band die with the lead singer everyone associated with it anyway instead of touring with Adam Lambert.