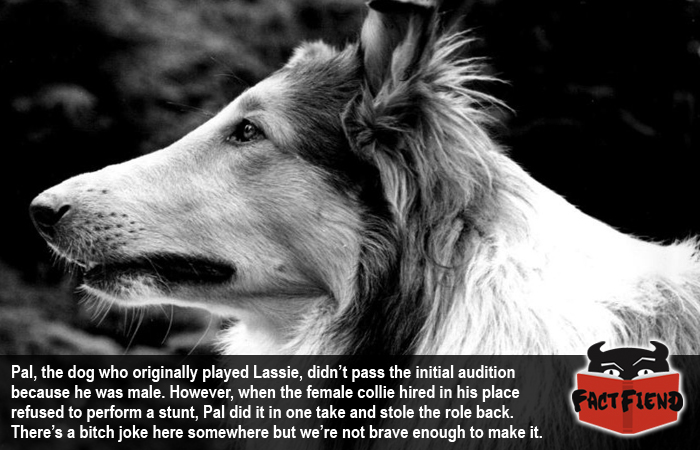 Before we talk about anything else, yes, the dog who originally played Lassie was male. In fact, every Lassie has been played by a male collie because they have thicker, oddly more feminine coats. The first Lassie of them all was played by a dog called, Pal, and the way he got the gig is just great.

Originally the directors of the first Lassie movie, Lassie Come Home, wanted a female dog to play the titular character and they even went as far as hiring one. However, Rudd Weatherwax famed animal trained and the owner of Pal managed to convince the directors that Pal could be a stunt double, citing that Pal had already been fully trained whereas the female they’d hired hadn’t. The directors, reasoning that an audience wouldn’t be able to tell the difference between two collies in an action scene, agreed and gave Pal and thus, Weathermax the job.

According to the official Lassie website, Pal’s big break came when, for a shot in Lassie Come Home which required Lassie to negotiate some rapids, the female dog hired to play her refused to enter the water. Presumably because she hadn’t been trained by a guy called freaking WEATHERMAX!

Weathermax, spying an opportunity to totally rub it in the other dog’s face and potentially see his dog drown in an actual raging river, stepped forward and proudly proclaimed “Pal will do it“. After only a few minutes of coaching pal then leapt into the water, traversed the rapids and climbed out on the other side, nailing the scene in a single take. The director was so impressed by this that Pal was immediately hired for the rest of the movie and Pal owned the role so hard that his (male) children monopolised the role for another 20 years. Because Pal rolled hard or not at all.