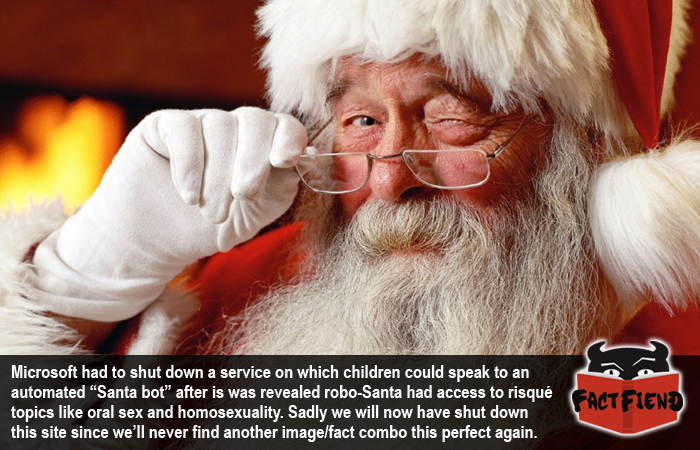 People have been thinking of ever more elaborate ways for children to communicate with Santa, because Santa is like wicked busy making iPhones, not because he doesn’t exist, obviously. One of the more hilarious ways this has backfired is the time Microsoft tried to create an automated version of St Nick and it got really weird.

At first the service worked perfectlly and the Santa-bot program functioned much like Cleverbot and it was capable of talking to children about a variety of Christmas based topics . We don’t know how parents explained to kids how Santa was instantly able to respond to every message they sent when he supposedly ON THE OTHER SIDE OF THE WORLD IN THE MOST SECURE SECRET BASE ON EARTH, isn’t clear, but boy do we want to see that conversation.

It didn’t take long though for kids to start breaking the program and after a while, people started reporting a number of odd topics of conversation Santa was capable of. For example, one parent noticed that for absolutely no reason Santa-bot began discussing oral sex with their 11 year old daughter, while we support teaching kids about safe sex, we think an overweight bearded man on the internet is exactly the wrong person to do it. Other people noticed that if you annoyed Santa-bot enough you could actually get him to admit to being interested in “big hairy men”. Hey, Santa, each to their own, as long as we get our crayons and copy of Pokemon we don’t care what you’re into, but yeah, don’t talk about it in front of kids, it’s weird.

Obviously when parents realised that this program was capable of such filth and that their kids were actually talking to a cold unfeeling machine and not the avatar of good cheer as was advertised, the entire thing was pulled by Microsoft. Again, we don’t know how parents explained to their kids why Santa could no longer be contacted any more despite the fact HE’S MAGIC, but we really want to see that conversation too.

Then again we also want to see what conversation topic could make Santa want to talk about oral sex for no reason at all, you know, for shits and giggles.