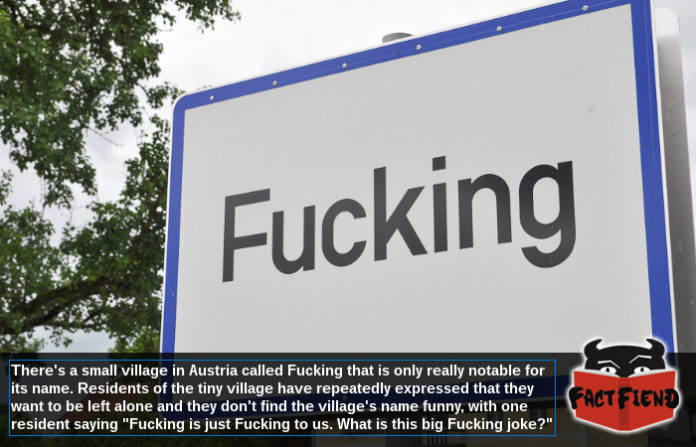 Having lived with the surname “Smallwood” for the last 2 and a half decades, the author of this article is sympathetic to anyone or thing with a name that sounds inadvertently sexual. However, there’s no other reaction but laughter to the plight of the poor residents of Fucking, Austria.

First to clear up a few things, yes, the village’s name is spelled and pronounced the way you think and no, the people who live there have no idea why English speaking people find it so funny. In fact, according to some reports, the entire village, which boasts a population of just over 100 people, didn’t realise that, to people who speak English, the name of their humble little hamlet was also amongst the harshest and most versatile swear words in their language until WW2. Amusingly, this fact is said to have only came to the attention of residents of when English and American soldiers began visiting from nearby Salzburg purely to have photos taken in front of the road sign leading into the village. Something that is still so popular with British tourists there’s a stock photo of someone doing it on fucking Getty images.

According to residents, British tourists seem to be the ones who find the sign funniest, leading to this fucking amazing quote from a Fucking resident:

“The Germans all want to see the Mozart house in Salzburg. Italians and Russians always celebrate New Year here. Every American seems to care only about ‘The Sound of Music’ The occasional Japanese wants to see Hitler’s birthplace in Braunau. But for the British, it’s all about Fucking.”

Along with taking photos in front of the sign, British tourists generally cause a nuisance by attempting to steal it (thefts of the Fucking sign are apparently the only reported crimes in the small village) and are occasionally caught having sex in front of it. Residents were so annoyed about drunk assholes stealing the sign that in 2005 the village’s 100 something residents clubbed together to buy special, theft-proof ones as well as install a 24 hour CCTV system to deter people from getting their fuck on in front of it.

Even still, residents have reported that they’re sick of fielding questions from tourists barely stifling a laugh asking if they sell Fucking postcards or merchandise. In regards to that last bit, for a brief spell one resident who saw the humor of the situation did sell official Fucking merchandise and was in talks to have Maxim sponsor him, but stopped after everyone in town started giving him a mean case of Fucking stink eye.

To their credit, the residents of the village have staunchly refused to bend to the will of the wider public who find the name so funny, turning down offers of sponsorship and the mayor of Fucking, who amazingly, gets to write that shit right on his résumé, has a blanket ban on talking to the press.

Still, it hasn’t stopped people from making a pilgrimage there to take selfies, prompting one resident to wonder out loud:

“What is this obsession with Fucking?”

A sentiment we can’t help but agree with, what is with this fascination with Fucking?