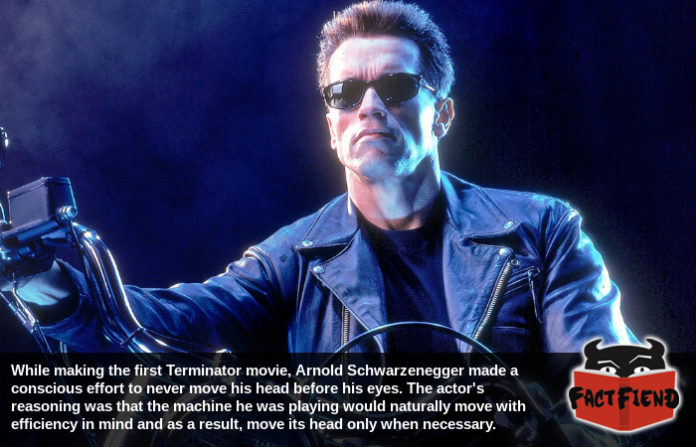 As we’ve discussed before Arnold Schwarzenegger basically stumbled ass-backwards into the role of the Terminator. However just because the actor never actually wanted to be a time travelling murder-skeleton, it doesn’t mean he didn’t put a shit ton of effort into playing what would become his most famous role.

According to Schwarzenegger prior to his involvement with Terminator the idea for the movie was basically to have a guy in a leather jacket chase a waitress around an abandoned factory for 40 minutes. By this we mean director James Cameron hadn’t actually given all that much thought to how the eponymous robo-assassin should act, that is until Schwarzenegger came along. 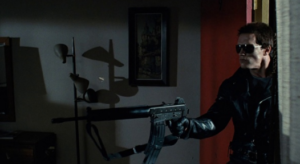 The story goes that during a lunch meeting with James Cameron, Schwarzenegger spoke at length about his time with the Austrian military and noted how it eventually got to the point where he could assemble and strip a weapon blindfolded. Schwarzenegger then explained that his idea for the Terminator is that it would similarly have an affinity for whatever weapon it was wielding and that it would appear to be at complete ease wielding a gun of any size.

This intrigued Cameron who motioned for Schwarzenegger to continue saying words, prompting the future Governor of California to explain how the Terminator should move with absolute efficiency in mind. To this end Schwarzenegger reasoned that the Terminator wouldn’t move like a robot at all, since the clunky, stiff movements traditionally associated with robots aren’t efficient. At the same time Schwarzenegger opined that the Terminator also wouldn’t move like a human being, since that too would be inefficient and would instead move in a unique and unsettling way. For anyone who wants a more visual representation of what we’re talking about, all you need to do is look at the Terminator’s eyes during like any scene in that movie. 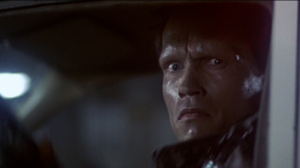 You see, if you watch the Terminator’s eyes while it’s in “search mode” or whatever the fuck you want to call it, you’ll notice that it always moves its eyes first. Seriously, check out this GIF from the the garage chase scene.

As you can probably see, Schwarzenegger is making a very deliberate effort to move his head in an incredibly awkward way because he’s turning only as far as he needs to see. Handily later in that exact same scene you get another view of this so you can more clearly see that Schwarzenegger is absolutely moving his eyes first every time he turns his head.

In addition to this, Schwarzenegger also tried to avoid blinking whenever he could while his eyes were visible, even when shooting opening fire on a crowd of people with an Uzi or when trying to punch his way through a car windscreen. Again Schwarzenegger’s reasoning was that the Terminator, as a machine, wouldn’t need to blink and as a result, he didn’t either. The hope of all this being that Schwarzenegger’s movements would be distinctly inhuman but in a way that was difficult for people to verbalise, making the Terminator an altogether more unsettling and terrifying foe. An effect we’d argue the actor achieved and then some.

With all of this in mind it’s no surprise that Schwarzenegger ended up wearing sunglasses for most of the Terminator franchise because let’s be real here, can you imagine how annoying it’d be to reshoot an action scene just because the main character blinked?