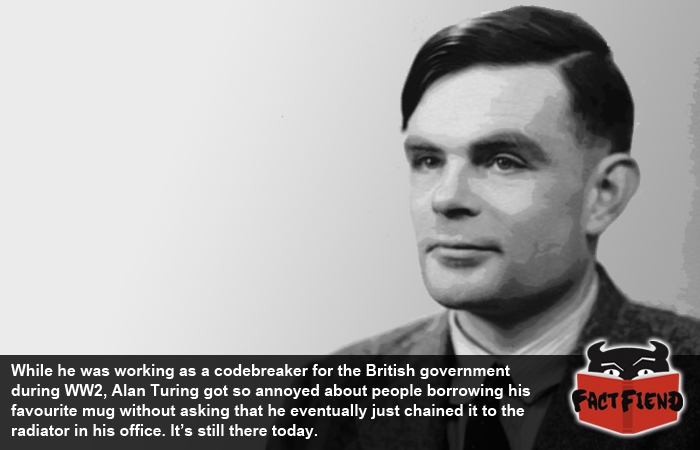 If you want to read the original article, you can find it after the jump.

Alan Turing is perhaps best known for being a pioneering expert in the fields of computer science, math and being a crazy eccentric asshole. In regards to the latter, nothing sums up Turing’s eccentricities more than what he did to his favourite mug to stop other people drinking out of it.

When it comes to Alan Turing there’s very little we can say that hasn’t already been said before in a way cooler accent and possibly a more expensive font. The man was a genius who played an instrumental part in ending WW2, technically making him responsible for saving tens of thousands of lives, who was then cruelly treated by the very country he served simply for being gay. He was a great man and we implore you to read more about him if you have the time. Before you do though, let’s talk about how he freaked the hell out of his colleagues while working at Bletchley Park.

According to a cryptologist called Irving Good who worked with Turing during WW2, Turing rode the same shitty bike to work every single day wearing a big-ass gas mask so that he didn’t have to breath in any pollen or exhaust fumes. Apparently Turing’s bike would break down every few minutes, forcing the codebreaker to climb off and fix it. What made Turing’s decision to continue riding the same bike every single day most confusing for his co-workers is the fact that Turing was a fucking phenomenal long distance runner who was known to run 40 miles from Bletchley Park to London for meetings in his work clothes because it was quicker than waiting to be picked up and he still rode a bike to work, for, reasons we guess?

Other eccentricities of Turing include converting all his money to silver and burying it in a field somewhere during the war and walking around his office wearing pyjamas, randomly bursting into fits of hysterical laughter at jokes he told himself in his head.  Speaking of his office, to stop people using his favourite mug, Turing bought himself a length of chain and a combination lock and chained that fucker to his radiator, seemingly unaware of the fact he was literally working in an office full of people trained to crack codes.

Being the secretive loner type that he was, Turing never bothered to tell anyone the combination to the lock when he left meaning that his mug is still there right now!

Then again, we find it hard to imagine anyone would have risked stealing Turing’s mug considering it would have resulted in being chased for the up to 40 miles by a guy in his pyjamas wearing a gas mask.