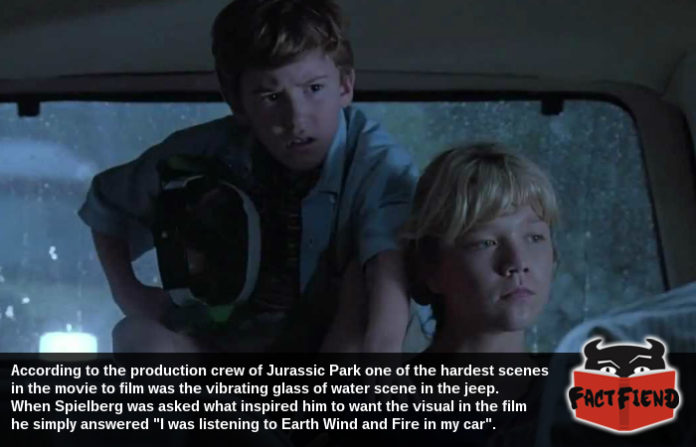 Jurassic Park is filled with special effects so ground-breaking the visual effects crew literally invented new kinds of CGI to bring most of those dinosaurs to life. As tough as that all was, the hardest effect in the entire film to realise was that shot with the glass of water.

Just so everyone’s on the same page before we continue, this is the shot we’re talking about.

According to Spielberg the visual was inspired by a car ride he was taking while listening to some Earth, Wind and Fire at max volume with the bass turned way up. The problem was that in real life, vibrations don’t cause water to do that. Sure, they cause the water to make little ripples but not the perfect, visually pleasing concentric circles Spielberg insisted on.

Lantieri called everyone he could think of from sound engineers to physicists with access to a wave tank asking if anyone knew how to make those water behave the way Spielberg wanted and everybody came back with the same answer. Please stop calling, we can’t help you.

Luckily Lantieri stumbled ass-backwards onto the answer while playing around with a guitar, noticing that a glass of water positioned atop the strings would produce the exact right pattern when a note was played. Which left him with one last problem to solve, how to replicate that on set?

With a way to create the shot in hand, Lantieri drilled a hole in the car’s door and fed a guitar string all the way through it before anchoring it to the floor. A guy was then brought in to lie below the car (which remember was parked in the mud while it was raining in the shot) and gently pluck the string on command.

Lantieri would eventually come to refer to that single, 3 second long shot as the hardest one in the entire film to realise. He’s also since noted that the week he spent flitting around prior to it being filmed searching for a way to make it happen was one of the most stressful of his career. A pretty bold statement for a guy whose actual job title required him to wrangle CGI dinosaurs.