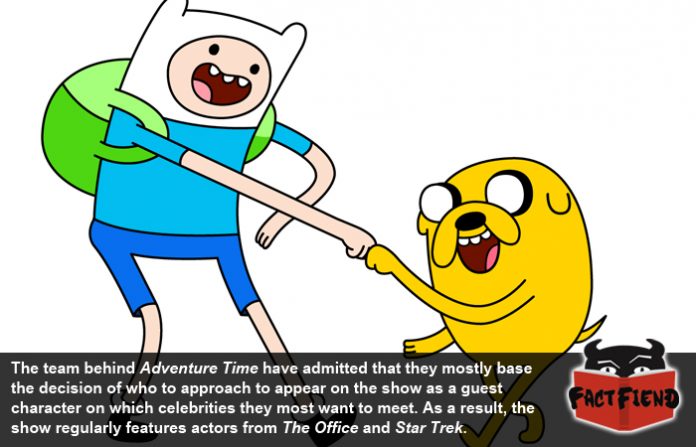 Like many popular shows, Adventure Time frequently features guest stars who are brought in to voice one-off characters. Unlike most shows though, these stars aren’t picked based on how much they’d fit into a given episode, but on how much the crew wants to meet them.

According to the crew behind Adventure Time, while writing episodes they will purposely try to include characters that could potentially be guest-voiced by a celebrity they like or have a crush on. Which explains why, to date, the show has featured cameos from everyone from Melinda May from Agents of S.H.I.E.L.D to Xena the Warrior Princess.

The show’s crew have revealed in interviews that the popularity of the show has basically resulted in Cartoon Network giving them carte blanche to approach whoever the fuck they want to voice characters as long as they keep pumping out episodes. This is mutually beneficial for both the crew and Cartoon Network because the crew get to meet their favourite celebrities while Cartoon Network get more characters to turn into Adventure Time merchandise that they can shill the shit out of in between episodes.

Unsurprisingly many members of the creative team behind the show are huge nerds and they’ve admitted that they’ve used Cartoon Network’s money to fund their dreams of meeting actors from shows like Star Trek, because fuck you, they can. In fact the crew have made it clear that they’re not going to stop making episodes of the Adventure Time until they’ve somehow had an excuse to hire every actor from Star Trek: The Next Generation to voice a guest character. Something they’re actually fairly close to accomplishing, managing to somehow convince the likes of Patrick Stewart (Captain Picard), Michael Dorn (Worf), LeVar Burton (Geordie), Marina Sirtis (Deanna Troi) and Jonathan Frakes (Commander fucking Riker) to all lend their voices to the show.

Likewise, the crew have made it known that they’re huge fans of The Office (the American version) and have similarly approached every actor from the show willing to listen to them about appearing on a show with a magical talking dog and asked them to voice a guest character. While they’ve yet to score as many actors as they have from Star Trek they have convinced Creed Bratton, Rainn Wilson, Brian Baumgartner and Clark Duke to voice a variety of dumb-fuck characters like a ghost or a talking gumball machine.

With the show being greenlit for at least another few seasons, it’s highly likely that the crew will actually accomplish their lofty goal of featuring every actor from both of these shows and will more than likely move onto collecting actors from another show they like, sort of like that Halloween episode of the Simpsons where Comic Book Guy is a villain who keeps his favourite actors in giant plastic bags. Wait a second, didn’t he kidnap Lucy Lawless in that episode? 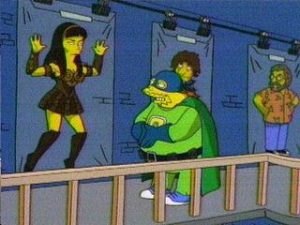 Shit. We’re onto you, Adventure Time!