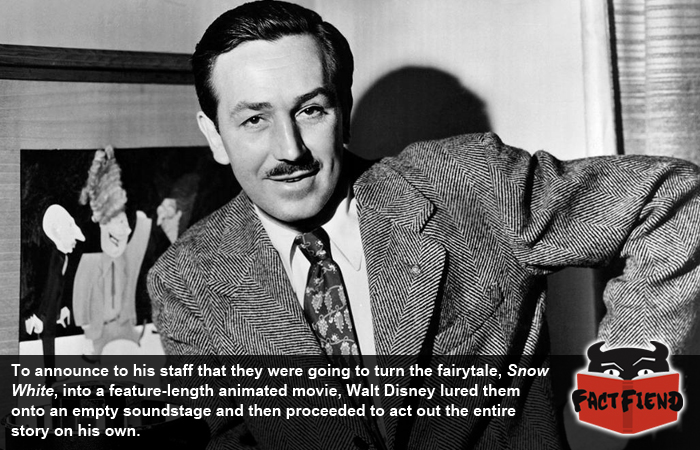 Walt Disney is one of those figures, like Darth Vader or the dog from Air Bud who will forever be a part of pop-culture due to the massive impact he made on it. Arguably Disney’s finest contribution to the world of fiction is Snow White and the Seven Dwarves. A film Walt Disney reportedly went to fucking insane lengths to make sure it was perfect.

Although today we know that the film was a massive hit and has made Disney (the company) millions, if not billons of dollars over the years, when Disney (the person with a moustache) first announced it in 1934, everyone told him that it was a bad idea and that it would probably bankrupt the shit out of his company. And when we say “everyone” we mean all of Walt’s friends, peers and even his own wife tried to convince him not to make this movie at one point or another.

Walt disregarded all of their pleas and went ahead with making the movie anyway, eventually sinking so much money into making it that he had mortgage his house, sell his car and beg his banker for more money. All in all it’s estimated that the film cost Disney’s production company about 1.5 million dollars. To put this in perspective the original budget set aside for the film was $250,000 – which itself was 10 times more than the company had ever spent on an animation before – and Walt somehow managed to spend this amount 6 times over.

In short, the film’s budget ballooned from an already exorbitant sum to one so comically astronomical you could elbow drop Scrooge McDuck from the top of it almost entirely due to Walt’s micro-managing of the film’s production and insistence on nothing less than perfection. For example, one of the things Walt made clear when he first pitched the film to his staff in 1934 by putting on a one-man-show of the entire story was that the animation had to be as realistic as possible, stressing that everything down to the fabric of people’s clothing should move in a natural way.

To make this happen Walt regularly brought wild animals, dancers and singers into the studio for his artists and animators to use as a reference for how realistic movement should look. Walt even went as far as hiring actors to act out scenes from the movie so that animators had a direct example of how people would realistically act or move in a given scene. A technique that Disney (the company who owns Spider-Man’s soul not the man) would use extensively for later movies. For example, for the film Fantasia involving a dancing hippo, the studio hired a 200 pound woman and asked her to dance around on stage so that they could see exactly how her various jiggly bits moved about as she got her groove on. For Cinderella they basically made actors act out the entire freaking film and then animated it.

Moving back to Snow White and the Seven Dwarves, Walt made his animators hurl bricks and various other objects through windows just so they could see how items of various weight reacted to being thrown or dropped and reportedly insisted on the facial animation being so dead-on that animators regularly spent days animating a single close-up.

The film took such a toll on Walt that he very nearly had a total breakdown in 1935 when the animation wasn’t progressing as quickly as he’d wanted. He was apparently only encouraged to continue making the film after taking a vacation and seeing a series of Mickey Mouse shorts that had been edited into a single movie, at which point he realised there was a market for a feature length animated movie.

When the film was released in 1937, all of the the naysayers that had spent the last 3 years shitting on his movie and his idea were forced to eat a rather large slice of humble pie that Walt had presumably spent an incredible amount of time rubbing his balls over when the film went on to gross more money than any other movie with sound ever released up to that point. If you count all the additional money the movie made by being re-released over the years, the film is probably one of the singular most profitable movies ever. Not bad for a movie the media referred to as “Disney’s folly” the entire time it was being made.