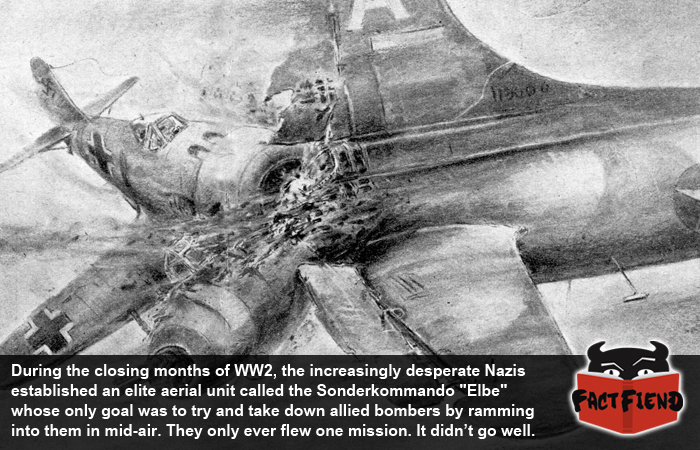 Since the dawn of the powered flight the nature of aerial combat has changed dramatically to the point that it is virtually unrecognisable from how it looked during say, World War 2. For example, consider the Sonderkommando Elbe, a specialised task force formed in the closing months of the war by the Nazis whose sole mission was to crash their planes into allied bombers in mid-air.

The Sonderkommando Elbe was basically formed as a last ditch effort by the Nazis to take out as many allied bombers as possible utilising a seldom seen and decidedly self-descriptive tactic known as “ramming the shit out of them in mid-air”. While the idea behind the Sonderkommando Elbe was similar to that of Japanese Kamikaze Squads, the Nazi high command didn’t want their pilots to kill themselves and actually advised them to bail out of their planes at the last second before they hit their targets. Not out of concern for their safety or well-being mind you, but because they had a surplus of planes and a deficit of competent pilots and they wanted to be able to send surviving pilots out in new planes to do it all again. Hey, this is the Nazis we’re talking about.

To ensure that pilots of the Sonderkommando Elbe did as they were told and crashed the fuck out of their planes instead of trying to shoot down allied bombers, they were only issued Messerschmitt Bf 109 planes that had all of their armour and weapons removed save for a single gun with 60 rounds in it. Said gun had an estimated fire rate of 900 rounds per minute meaning each pilot had enough bullets to fire their gun for about 15 seconds before being left completely unarmed. When a pilot inevitably ran out of bullets during a dogfight, he was expected to use his plane as a weapon by flying directly into the cockpit, wing or engine of the nearest bomber.

Amazingly, despite essentially being a suicide squad who were openly told by Hermann Goring himself that their chances of survival were “very minimal” the Sonderkommando Elbe managed to scrounge up a number of highly skilled pilots who were willing to make the ultimate sacrifice for their country. However, in the end the Sonderkommando Elbe, which was originally intended to be a force some 2000 aircraft strong, only ended up with 120 pilots, who on the morning of April 7th 1945 took on a force of 2000 enemy planes over the skies of Germany.

While details of this mission are sparse, mainly because the Nazis repeatedly lied about the effectiveness of the unit to make their dicks look huge, details from allied mission logs show that the 120 Sonderkommando Elbe pilots who took to the skies that fateful day did manage to take out a number of bombers, though exactly how many isn’t clear. We do however know that one German pilot managed to accomplish something that day that has never since been equalled or matched in warfare when he took out two bombers at the same time by crashing into them. The pilot, identified as one, Sergeant Heinrich Rosner was able to score the double melee plane kill by carefully angling his plane in such a way that he sheared the back end off of heavy bomber, causing it to split in half and take out the bomber next to it to. What makes this even more impressive is that it was Rosner’s first fucking day of being a pilot.

Overall though the mission was deemed to be a huge failure that resulted in the needless deaths of hundreds of capable Luftwaffe pilots. That said, it did also result in Sergeant Heinrich Rosner having the best drinking story of all time, so it wasn’t all bad.