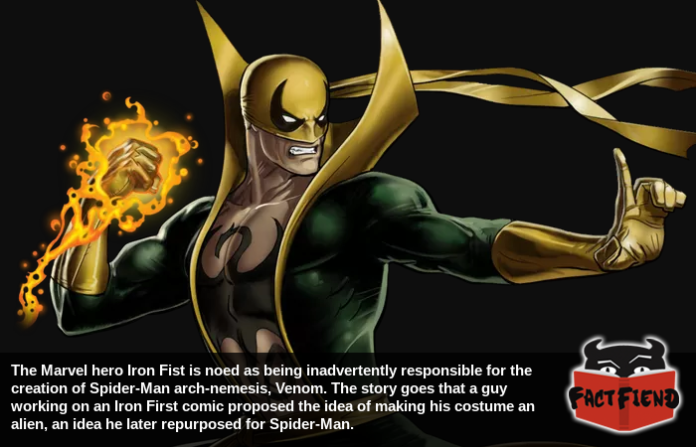 Venom is an Marvel villain and occasional anti-hero defined by his unrelenting fixation on Spider-Man. While the history of each character is intrinsically linked, Venom’s origins can be traced back not to the Wall Crawler, but another Marvel hero known as Iron Fist.

To explain, according to the comics Venom hails from, the shape-shifting alien symbiote was first discovered by Spider-Man during an arc known as the Secret Wars. Specifically it’s noted that Spider-Man inadvertently bonded with Venom after mistaking a machine holding him captive for a one that made new clothes. No, really.

It is subsequently established that Venom hails from a race of supposedly peaceful aliens known as the Klyntar that possess extreme regenerative abilities and can dramatically increase the strength and agility of any living being by bonding with them. A fact that results in Venom becoming obsessed with Spider-Man as it sees him as the “perfect” host and is partly the reason for the characters comic arcs being so closely intertwined.

The thing is though, the writer who came up with he idea of the costume, John Byrne originally envisioned it being worn not by Spider-Man, but the man who punched Shou-Lao the Undying to death. Danny Rand, the Immortal Iron Fist. You see, when Byrne first started working on Iron First comics in the 1970’s, he noticed that the character’s costumes tended to get a little, scuffed up when he was using an ancient martial art to Bruce Lee people’s spleens to a bloody pulp. 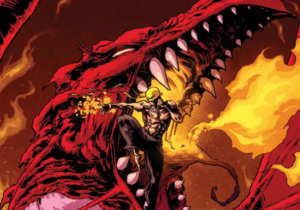 To try and remedy this Byrne had the idea to give Iron Fist a new costume that was actually a cool alien, reasoning that this made more sense than Iron Fist sitting around after his adventures sewing up the punch-holes in his outfit. Seriously.

While the idea was never implemented for various reasons, the main one being that Iron Fist’s powers were deemed to be more mystical than alien in nature and thus, having him walk around with a sentient alien being around his nutsack seemed a little strange, Byrne kept it in mind and once again floated it past an editor when the Secret Wars arc began. Seeing as Secret Wars took place on an alien battle-planet, the idea of an alien suit was deemed to be more fitting and thus, Venom was born.