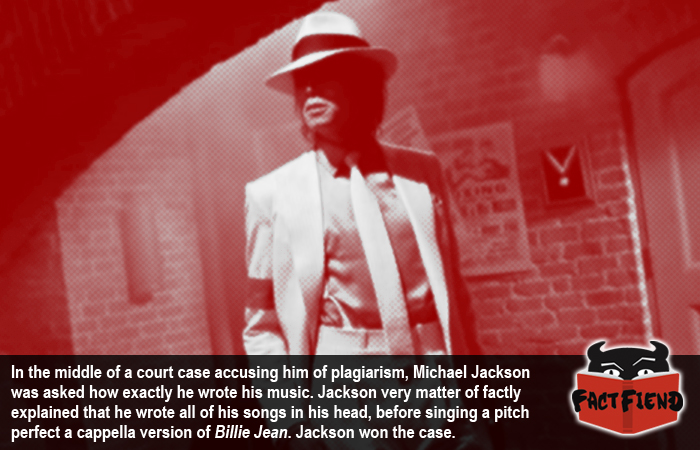 Back in 1994 Michael Jackson was sued by a lady called Crystal Cartier who claimed that the King of Pop had plagiarised her song Dangerous. In the resulting court case Jackson proved his case by singing to the court room.

Before we get too ahead of ourselves, Dangerous was a song released by Jackson way back in 1991 as part of an album with the same name. Like many of Jackson’s albums it was a critical and commercial success with the song Dangerous in particular receiving a lot of praise from critics and fans.

However, there was one person who didn’t like the sound of the song at all, a songwriter called Crystal Cartier who claimed that she’d written and copyrighted an identical song back in 1985. Cartier quickly filed a plagiarism suit against Jackson and the whole thing came to a head in 1994 when the case reached court. Which is where things get interesting.

The court case is well known amongst fans of Jackson as one of the few times the notoriously secretive singer ever explained the process behind how exactly he wrote his songs. According to Jackson, he wrote all of his songs in his head, vocally creating the noise each instrument would make and recording the results with a tape recorder.

When asked to demonstrate this curious way of creating music, Jackson dutifully beatboxed the bass lick to Billie Jean before singing both the melody and the opening lyrics. According to people who knew Jackson, this is essentially how he wrote all of his songs.

You see, as weird as it’s going to sound, Michael Jackson couldn’t actually read music or play any instrument with a reasonable degree of skill. So, when it came to writing his songs, Jackson would usually beatbox the instrumental aspects of a given song before layering the vocals on top. Once he was happy with the song, he’d then take it to his sound engineer to record it. As noted here, Jackson would compose every aspect of a given song entirely in his head before vocally recording it for reference. You can hear an incredibly rare example of Jackson doing this with the song Beat It, here, if you’re interested.

Back to the court case though, after explaining how he composed his songs and vocally demonstrating the process to the court, Jackson was asked how he came about composing the track Dangerous. Again, Jackson explained that he did so in his head back in 1985, which you may notice as the date Cartier claimed she’d recorded the song.

When Jackson was asked if he had any proof, he once again vocally demonstrated the process he went through the song before producing his original demo tapes. When Cartier was asked to do the same, she mysteriously couldn’t find any tapes from 1985.

As a result, the court had no choice but to side with Jackson, who presumably moonwalked out the room while giving Cartier the finger.