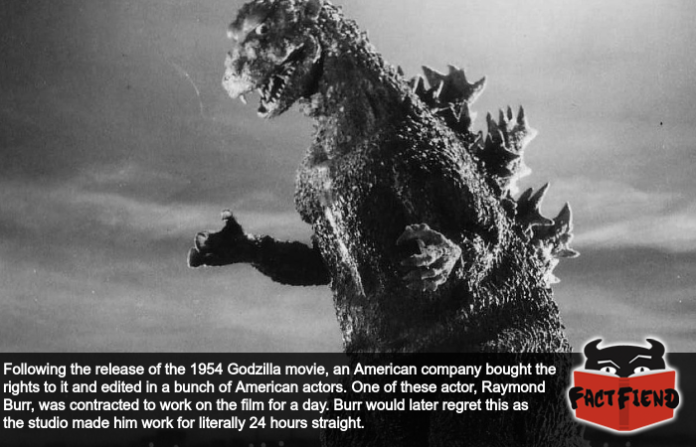 The 1954 Godzilla movie is rightfully considered a classic because it’s kind of hard not to love a movie about a giant atomic salamander-monster moonwalking over a city. Now while the original, Japanese version is the most famous, there’s a lot to be said about the American adaptation, most of it about how they made an actor scream about the eponymous kaiju for a day straight.

That actor was Raymond Burr, who is perhaps best known for playing turbo-lawyer Perry Mason in th3 1950’s and his fondness for cultivating and giving away super-orchids worth the modern equivalent of tens of thousands of dollars.  No, seriously. Anyway, besides this Burr is also know for playing the character of Steve Martin in the American version of Godzilla which was renamed Godzilla, King of the Monsters. A name we have to admit, kind of slaps. So much so that the owners of the Godzilla brand, Toho, just up and stole it for use in their own movies years later because, come on.

Now you might be wondering how on Earth Burr, a burly white dude was inserted into a movie set and focusing almost-entirely on Japan without it seeming weird and the answer to this is kind of amazing. You see, to make the movie more palatable for a western audience of the time (read: put white people in it) they filmed a bunch of scenes that framed Godzilla’s attack as a memory being recalled by Burr’s character from his hospital bed after having the majority of his arsehole stomped by Godzilla.

To help sell that Burr was indeed part of the original movie, a bunch of scenes were filmed of him talking to whatever random Asian people the studio could find, usually filmed from either behind or cloaked in a convenient and dramatic amount of shadow to make it look like he was interacting with characters from the original film. The studio additionally dressed these extras up to look like soldiers and what not and made Burr stand behind them and then awkwardly inserted them into the film. Seemingly just to make things more awkward for Burr, none of these extras spoke English and had no idea what they were doing. 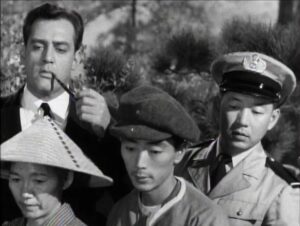 Though a little cheap looking today these efforts were sufficiently convincing to entice American viewers and earn the film a few decent reviews, the most important one coming from the director or the original who found the additions hilarious. Noting how funny it was to see a film he made as a send-up to American monster movies be re-edited to look more like the kind of movie it was already emulating and then be criticised for that fact by reviewers.

Getting back to filming, the story goes that Burr was contracted for a single day of work on the film. Something that understandably led to Burr assuming his workload would be quite minimal. However after signing Burr producers realised that they’d likely need him for the entirety of the three days of shooting if they wanted to film all of his proposed scenes. Also yes, for anyone wondering, yes the American version of Godzilla was slapped together in 3 days.

Rather than, you know pay Burr more, a producer scoured his contract and realised that the actual terms Burr agreed to were, shall we say, open to interpretation and as such noticed that there was a loophole big enough for Godzilla to take a shit through they could abuse to get more work out of the actor. Specifically, according to a long-standing industry rumour Burr himself would later confirm, he’d agreed to make himself available for 24 hours which the studio decided to read in the most literal manner possible and force Burr to work for literally 24 hours straight. A rumour we’re inclined to believe because it involves a massive Hollywood production fucking over an actor who signed and agreed to a contract in good faith and we can’t imagine anything more Hollywood than that.