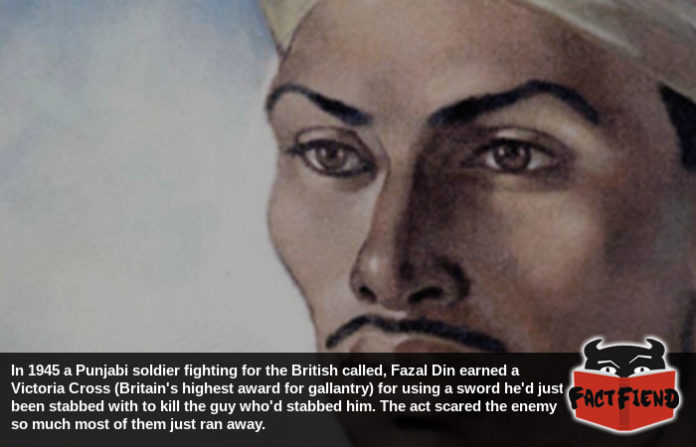 If you’ve ever played Skyrim  you may recall that every now and you’ll overhear a guard act like King Shit Puss Slayer by bragging about how they were once an adventurer like you until they took an arrow to the knee. A claim Fazal Din would scoff at while nonchalantly pulling a fucking sword out of his chest.

Fazal Din’s remarkable story of heroism and dicks-smashing in 1945 in the closing months of the war in Burma. A rifleman in the British Army who eventually achieved the rank of Corporal, Din was a fearless and committed soldier who inspired the men around him with his bravery and razor sharp cheekbones.

On the 2nd of March, 1945 Din’s unit became surrounded while blowing the fuck out of fortified Japanese bunkers. Rather than retreating, Din seized the opportunity to charge the nearest bunker, since, well, it was right there.

Din advanced on the bunker while hurling both grenades and insults in every language he knew flanked by his men, which eventually caused the 6 Japanese soldiers inside to come outside to see what the fuck was going on. 2 of these soldiers were officers armed with swords and decided to try and weaken the group by attacking their heavy gunner, something Din’s moustache simply would not allow.

Din quickly ran to the gunner aid, hoping to use his own body as a shield to protect him from the charging Japanese officers’ blades. The gunner managed to shoot one of the officers but was violently cut down moments later while trying to reload. As Din attempted to administer first-aid, the remaining officer stabbed him right through the chest so hard the tip of the sword was reportedly visibly poking out of his back.

Fueled by the kind of rage you can only muster when you simultaneously witness a close friend die before you eyes while being stabbed through 3 vital organs at once, Din tore the sword from his chest and beat the officer to death with the sharp end. Time seemed to stop at this moment and all eyes, both allied and Axis, fell upon Din. Utilising his newly acquired weapon Din then let out a scream and proceeded to begin decimating the gathered Japanese soldiers with endless crowd control sword combos. This understandably rallied Din’s men who followed the path of destruction he was literally carving through the Japanese ranks with his new toy.

While this was happening the Japanese began totally losing their shit, as is wont to do when your commanding officer is killed by the fucking T-1000, which allowed Din and his men to seize the upper-hand and push back the Japanese forces surrounding them. Seeing that his men had everything under control and with his rage meter almost depleted, Din walked over to a nearby command post and gave his Commanding Officer a run down of what had just happened before promptly dropping dead, presumably because God wanted to hire his moustache as a bodyguard.

Initially nobody believed Din’s story until his entire platoon stepped forward and confirmed that yes, he’d totally just single-handedly reenacted a scene from Ninja Gaiden in front of their very eyes.

Din was posthumously awarded a Victoria Cross a short while later because of course he fucking was.