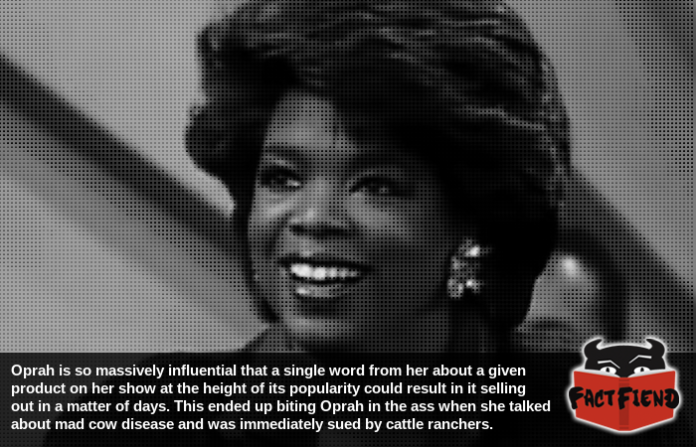 Few women in entertainment can ever claim to wield as much power as Oprah Winfrey did in the 1990’s. A massive TV draw, Oprah could cause a product to sell out overnight simply by mentioning it on her show. A fact that saw her being sued by the beef industry.

First though for anyone who may be unfamiliar with how powerful Oprah was in the 1990’s, her syndicated talk show, creatively called, The Oprah Winfrey Show, was one of the singular most watched things on the airwaves back then. A fact that brands decided to exploit the ever-loving shit out of, working in tandem with Oprah and her producers to create a segment on the show called Oprah’s Favorite Things. 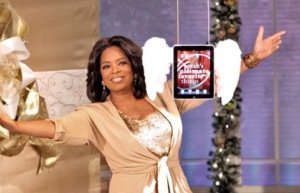 If you’ve never seen the show, this was basically an annual giveaway where Oprah would reel of a list of cool shit she’d seen that year and gush endlessly about it before telling everyone in the audience that they were going to get everything she just mentioned, for free. 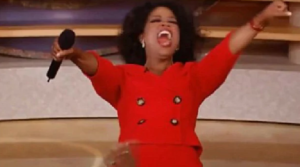 While ostensibly framed as an organic part of the show, the giveaways were all absolutely being paid for by the brands featured. This said, a producer for the show did once explain in an interview that “No one tells Oprah what to say” so while the brands featured did get probably the best exposure any company could hope for in the 1990’s, they had no control over what form it would take. Brands who choose to live by the Oprah die by it apparently.

You see, in 1996 Oprah aired a segment about food safety, during which an expert briefly touched upon the mad cow disease epidemic sweeping across Britain and made an off-hand comment about it possibly coming to the United States. In response Oprah tented her fingers as she so often does, looked the expert dead in the eye and said simply “I’m never eating another burger“.

A week later a bunch of Texas cattle ranchers sued her for libel, claiming the comments had contributed to the falling price of beef and cattle in the United States. Yes, Oprah was so powerful in the 1990’s that a bunch of cattle ranchers genuinely believed that a single, offhand comment she made in one episode had caused the wholesale price of cattle in the US to tumble. 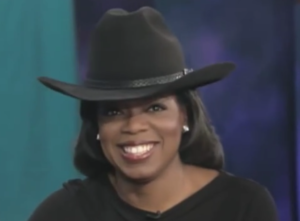 Oprah initially laughed off the accusation because holy shit does the idea of a single woman being able to influence the price of beef with a single sentence sound stupid, but Texan cattle ranchers were dead fucking serious and filed suit $10 million. The thing is, at the time the suit was filed against Oprah she was in the middle of filming her show and producers told her she couldn’t air re-runs. Unwilling to go off the air for a month while she fought the issue in court, Oprah moved production of the entire show Amarillo, Texas because fuck you she’s Oprah.

Amusingly despite everyone in the country knowing why Oprah was in Texas, a gag order prevented her from actually mentioning the court case on air. This annoyed Oprah who decided to instead just keep mentioning the gag order because technically that wasn’t against the rules.

Oprah eventually won the suit, much to the annoyance of cattle ranchers who are still annoyed about it today, and celebrated in the only way she knew how. With a huge extravagant segment on her show dedicated purely to all the legal-dick she kicked in court. 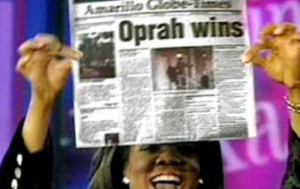