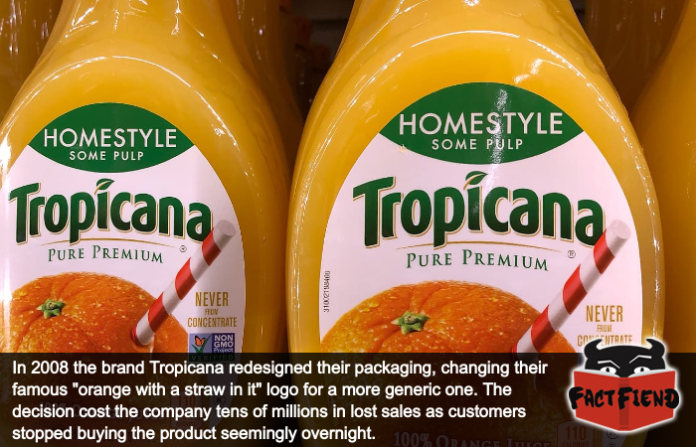 Building an effective brand is like dating in that it’s a hell of a lot easier if you’re a snack or spend a lot of money looking good. That said, this isn’t always the case as Tropicana learned in 2008 when they spent millions redesigning their popular line of orange flavoured and coloured juice and ended up losing the same amount twice over because customers missed the orange.

To explain, in 2008 Tropicana contacted an advertising agency called Arnell and tasked them revitalising their flagship juice line, giving the agency a blank check to change whatever they felt was necessary to maintain their sticky-fingered stranglehold on the juice industry. 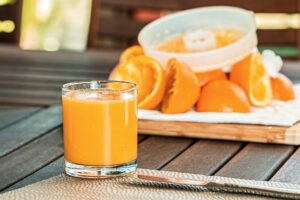 Arnell then spent 5 months and $30-35 million of Tropicana’s money profiling the brand and learned that it was among the most immediately recognisable of the big juice brands, thanks in large part to it’s strategic use of a giant fuck off orange on the front of every carton. 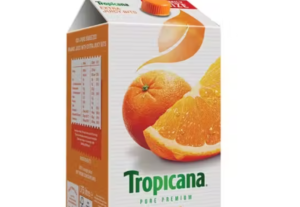 Something Arnell, in its infinite wisdom decided to flush right down the orange-scented toilet, replacing the orange with a glass of orange juice spread across two sides of the carton. A neat idea from a marketing perspective but one ignorant of the reality of how stores are actually laid out, something you’d think a multi-billion dollar creative agency with 30 years of experience in the industry would have known. 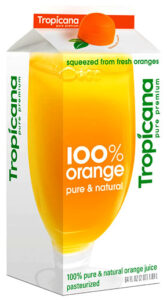 This isn’t to say the redesign was all bad as many marketing experts and trade magazines had a lot of good things to say about the cartons lid, which was redesigned to look like an adorable baby orange. The problem was that this baby-ass orange didn’t stand out as well on shelves as, oh let’s say, a giant fuck-off orange that takes up 3/4 of the carton’s front. You know, like they had before.

Anyway, after sinking millions of dollars into this redesign, Tropicana organised a soft-launch using their their flagship product, Tropicana Pure and then watched as sales cratered harder than Wolverine elbow dropping a kiddy pool from low orbit.

Exactly how much money the change cost Tropicana isn’t clear but estimates range from $30-50 million with the true amount likely being much higher due to rival juice brands capitalising on the misstep and sticking their mile-long crazy straw into Tropicana’s drink and sucking like crazy. All in all Tropicana saw sales drop by 20% in just a few days which so terrified Tropicana that they scrapped the entire relaunch two months later.

What makes this business bungle so hilarious is that could have easily been avoided if exactly one guy didn’t get it into his head that people just didn’t get juice.

Specifically the head or Arnell, Pater Arnell is reported to have played a huge role in the campaign, spearheading the redesign and heroically ignoring pretty much everything his own company’s research discovered and insisted upon swapping out the orange for a glass of juice because he realised that no other brand actually showed the juice.

A claim many marketing experts were quick to counter, reasoning that nothing captured the idea of what juice was more than, you know, the fruit it comes from. Unsurprisingly, Arnell’s reputation as a brand kingmaker was damaged, some would say irreparably, by the fiasco, with the company itself folding just a few years later after 3 decades in business. Proof if it was ever needed not to fuck with a winning formula.