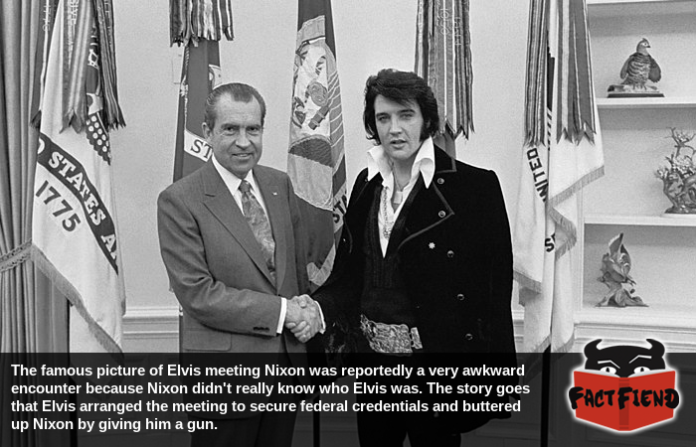 At the height of his fame Elvis Presley was a man who could basically get away with pretty much anything. A fact no better proven than by that time he walked into the Oval Office in a crushed velvet suit and handed the President of the United States a fucking gun.

Now while you’d think that Elvis must have spent weeks, if not months, trying to arrange a meeting with the President, the story goes that it took him mere hours to secure a personal audience with the most powerful man in the world. 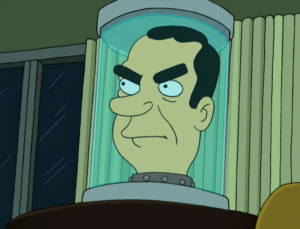 What’s more, according to those who would know such things, Elvis arranged the meeting on a whim. Supposedly after going on an impromptu trip to Los Angeles after being yelled at by his wife for spending $100,000 on guns and cars to give to family and friends for Christmas.

While brooding in LA, with some guns of course, Elvis decided that he really wanted Federal credentials so that he could go wherever the fuck he wanted with said guns. Specifically Elvis wanted a badge from the Bureau of Narcotics and Dangerous Drugs, which he believed represented “the ultimate power“. The fact that no such badge existed at the time didn’t seem to bother Elvis who made a beeline for Washington to ask the President for one.

Knowing the President had a hard on for hating hippies and counter-culture types, Elvis penned a letter on his way there stating his desire to help the President combat these ne’er-do-wells in anyway he could. A promise that piqued the interest of Nixon who believed a man as famous as Elvis could probably deliver on such a promise. 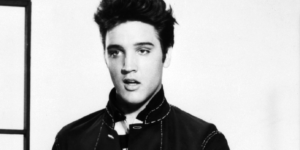 And so the meeting between the pair was arranged, a meeting that by all accounts was awkward as all hell because Nixon didn’t really know who Elvis was. Also probably because Elvis wanted to give Nixon a gun, which you’ve probably guessed isn’t something people are generally allowed to do. An exception was made for Elvis though because Nixon’s security were fans of his. As a result, Elvis was allowed to walk straight into the Oval Office with a gun and hand it to Nixon. As if that wasn’t badass enough, Elvis then asked Nixon if he wanted an autograph. Yes, you read that right, Elvis met the President and asked him if he wanted an autograph and you know what, the President said yes. 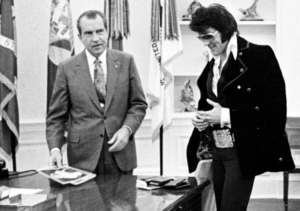 Elvis then spent a few minutes buttering the President up by shitting on The Beatles and then asked him for a federal Bureau of Narcotics and Dangerous Drugs badge. A badge remember, that didn’t exist. A confused Nixon then asked an aide if he could honor such a request, to which they responded basically “you’re the President, so, yeah.”

A few days later Elvis received a custom-made badge in the mail which he reportedly carried with him for the rest of his life (hell, he was even buried with it) and would flash whenever he got stopped by the police, telling them he was an official “Federal Agent at Large”. We should point out that, like the badge, the position of Federal Agent at Large didn’t exist. Though we find it hard to believe that any police officer would call Elvis on this when he could literally say he got his badge and credentials from the President.