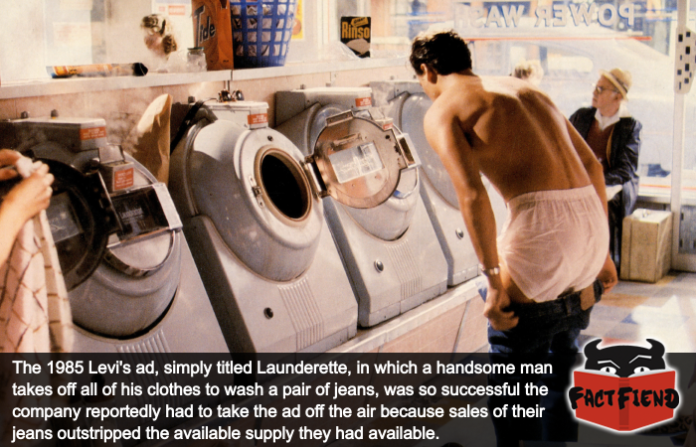 The ad in question, simply titled, Laundrette because oh yeah, in case you didn’t know, ads have titles it’s just that most people don’t give a shit, is arguably one of the most successful ever made and centres around a pretty simple concept. A guy walks into a laundromat and washes his jeans. The twist (because all good concepts need a twist) being that the guy strips off to wash literally everything he’s currently wearing. Adhering to the unofficial Fact Fiend motto of, when in doubt, whip it out. 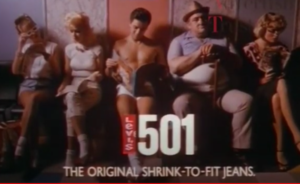 Conceptualised by the ad agency, Bartle, Bogle & Hegarty as a way of revitalising the Levi’s brand which research showed was deeply unpopular with younger people who saw Levi’s as the kind of jeans worn by terminally uncool dads with dumpy asses and a saggy midsection. 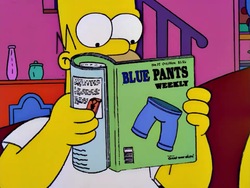 To shake this image, the ad was deliberately crafted to evoke the feeling of 1950’s Americana right down to the casting of model Nick Kamen who had that rough and tumble James Dean look locked the fuck down. 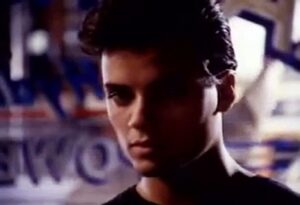 Anyway, the ad was an immediate hit with sales of Levi’s shrink-to-fit jeans increasing by about 800%. Which, while impressive is kind of the point of an ad, right? To increase sales so, where’s the all important twist here?

Well the ad was so successful that it didn’t just increase sales of Levi’s jeans but all jeans for sale in the UK where the ad aired. With totally unrelated companies reporting sales increases of upwards of 40-50% of their own jeans as people rushed to stores to buy a pair after seeing how sculpted Kamen’s man-buns looked in those ass-huggers. 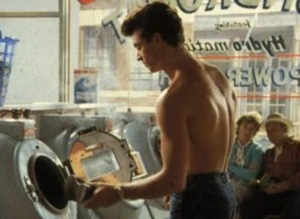 But that’s not all because during the ad Kamen trips down to a pair of boxers which, would you believe it, also saw a spike in sales when men watching the ad realised that their old ratty Y-fronts probably weren’t that appealing, to the ladies. Amusingly, the ad originally called for Kamen to wear Y-fronts but the British Advertising Clearance Centre thought that it would be too obscene if Kamen’s dick was all hanging out there for everyone to see. 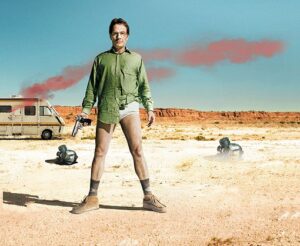 But we’re not done yet because the song playing during the ad, Marvin Gaye’s I Heard It Through the Grapevine also saw a sales boost, becoming a number one hit 15 years after it was released as a direct result of it’s appearance in the ad.

All in all the ad ended up causing sales of Levi’s to increase twenty fold in just a few years with the company reporting that in the immediate aftermath of the ad’s release, demand ended so far outstripping supply that the company willingly took the ad off the air themselves because the increased visibility of the jeans wasn’t worth the hit to their reputation caused by nobody being able to buy them.

Anyway you look at it, that’s a pretty fucking good ad.