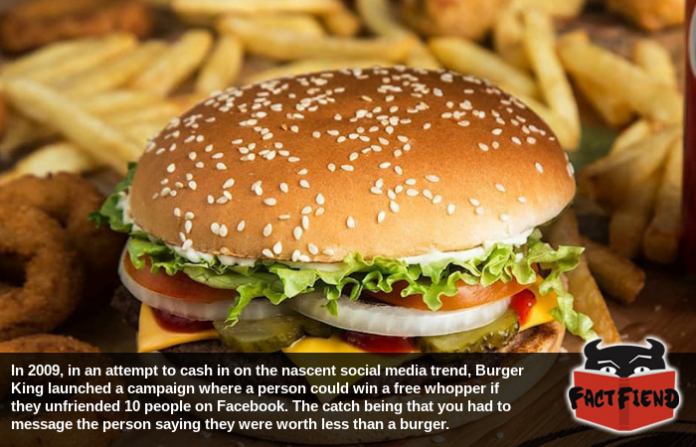 It’s often said that you can’t put a price on friendship. Then again this saying was coined long before concept of a friend was diluted to the point it can mean people you met once, at a party you don’t remember, 5 years ago. Something the company Burger King decided to showcase when they offered people the chance to win a free burger for telling 10 Facebook friends to fuck all the way off.

Dubbed the “Whopper Sacrifice” campaign, the marketing stunt is noted as being one of the earliest attempts by a fast food chain to take advantage of, at the time, nascent social media ubiquity. Something that becomes immediately obvious when you realise that the campaign took place on Facebook.

Widely lauded at the time by marketing experts for its ingenuity, the idea of the campaign was pretty straight forward – simply choose 10 people on Facebook you thought sucked ass enough to unfriend them and you’d be given a voucher for a free whopper. However, the twist was that the person would be notified of the fact that you’d done this, being sent a message from Burger King bluntly informing them that their friendship was worth less than a whopper. Which wasn’t really true because technically by unfriending them you were saying that they were actually worth less to you than 1/10th of a whopper. Something the marketing firm behind the campaign, Crispin Porter & Bogusky, absolutely insisted upon happening each and every time it happened.

How do we know this? Well anyone who remembers Facebook or still uses it out of a weird sense of obligation to keep tabs on their racist uncles and people from high school with ugly kids, may have realised that something about that previous paragraph was amiss. Specifically the part where Burger King would send the person being unfriended a notification informing them that keeping up with their life was less important to you than 30 cents of burger.

Well Facebook had a problem with that too, because the site was and presumably still is, concerned with the possibility of people responding to being unfriended poorly. As such, it is Facebook policy not to inform people that they’ve been unfriended to avoid people getting their virtual Fatal Attraction on.

When this concern was raised with Burger King and it was requested that they change the campaign so that maybe people weren’t informed by a unfeeling corporate entity that one of their friends had sold them out for a fucking burger, the company instead pulled the plug on the entire campaign. 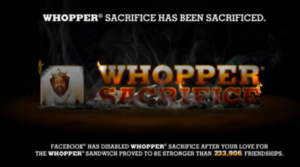 Meaning it was so important to Burger King that people know they’d been unfriended over a whopper that rather than continue the campaign – which was by all accounts, wildly successful – they stopped running it after just 10 days. The lesson here being clear, don’t fuck with the King.