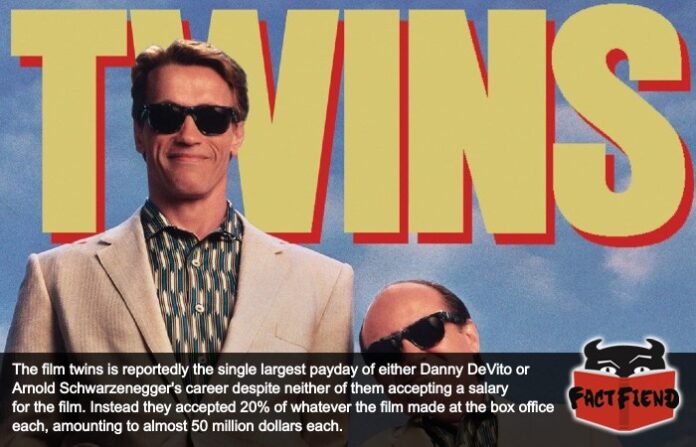 At the height of his career, Arnold Schwarzenegger was one of the highest paid actors in Hollywood with the Austrian Oak being able to command millions of dollars for his time. Something that has been partly linked to a deal he made back in the 1980’s that saw him accepting a salary of zero dollars for appearing in a movie that grossed almost a quarter of a billion dollars at the box office. A deal that later saw the actor being paid in jet planes.

That film was Twins, a movie about a set of genetically engineered super twins who were separated at birth prompting the larger, more Austrian twin to embark on a quest to find the smaller more greasy one. 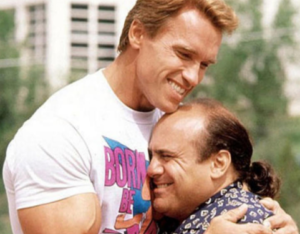 Anyway, the film was an unexpected hit earning some $200 million at the box office which, adjusted for inflation is close to half billion dollars today. Not bad for a film made on a budget of just $16 million (about $35 million today), a remarkably modest figure considering it starred a post Terminator Arnold Fucking Schwarzenegger and was directed by the guy who helped make Ghostbusters. Ivan Reitman.

Well the reason the film was able to be made so cheaply has a lot to do with the fact that nobody in Hollywood thought it was going to be success and they especially thought that Schwarzenegger was a terrible choice for a comedic role. Which, well, they got partly right.

In fact, producers were so convinced that Schwarzenegger could not carry a comedy that they poo-pooed the idea of Twins despite, as the actor himself would later note in his autobiography, selling the film would simply be a matter of putting himself and Danny DeVito on the poster stood normally with the word “TWINS” above it. Something the studio actually ended up doing when Schwarzenegger, DeVito and Reitman offered to make the movie, for free. 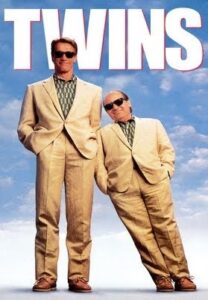 Specifically all three men agreed to make the film for literally zero dollars in return for a 37.5% share of the film’s total box office gross. Something that, as we’ve discussed before, studios often use to screw actors over by cooking the books in such a way to ensure no such payouts ever occur. Which Schwarzenegger, who holds a degree in business and marketing in his second language, was keenly aware of and made sure absolutely did not happen. Not that, that was needed because we can’t imagine anybody in Hollywood would risk pissing off this guy … 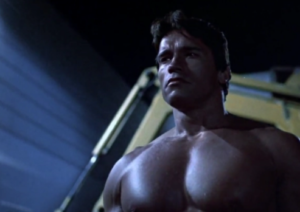 Moving on, the gambit paid off massively with each man walking away with, according to Mr. Universe himself, the biggest payday of any of their careers. It’s arguably that Schwarzenegger got the best of this admittedly phenomenal deal though because not only did he get the lion’s share of the 37.5% but the resulting near $50 million payout he walked away with made studios so scared to make a similar deal that his per-movie fee immediately rose to $25 million to stop him demanding something similar.

As an idea of how terrified studios were of setting this precedent and letting the actor walk away with a quantifiable percentage of any of his future film’s profits, the studio behind Terminator 2 gave him a fucking jet so that he wouldn’t ask for a similar deal. Meaning that, in a roundabout way, appearing in Twins for free, inadvertently led to Arnold Schwrzenegger being paid in jets for pretending to be a robot.